If you know how to work out the notes of the A-Major scale and the 7 different chords you can use for each major scale, this article will help you to understand the circle of 5ths and how to use it. Sometimes these chords might get a little repetitive or you might not even want to use these chords. So, we can refer to something called the circle of 5ths to find different keys that are near the key we are in.

This can be useful to actually modulate or change key completely or to even temporarily go to a key and use some chords from that key and then go back to the key that we're in. 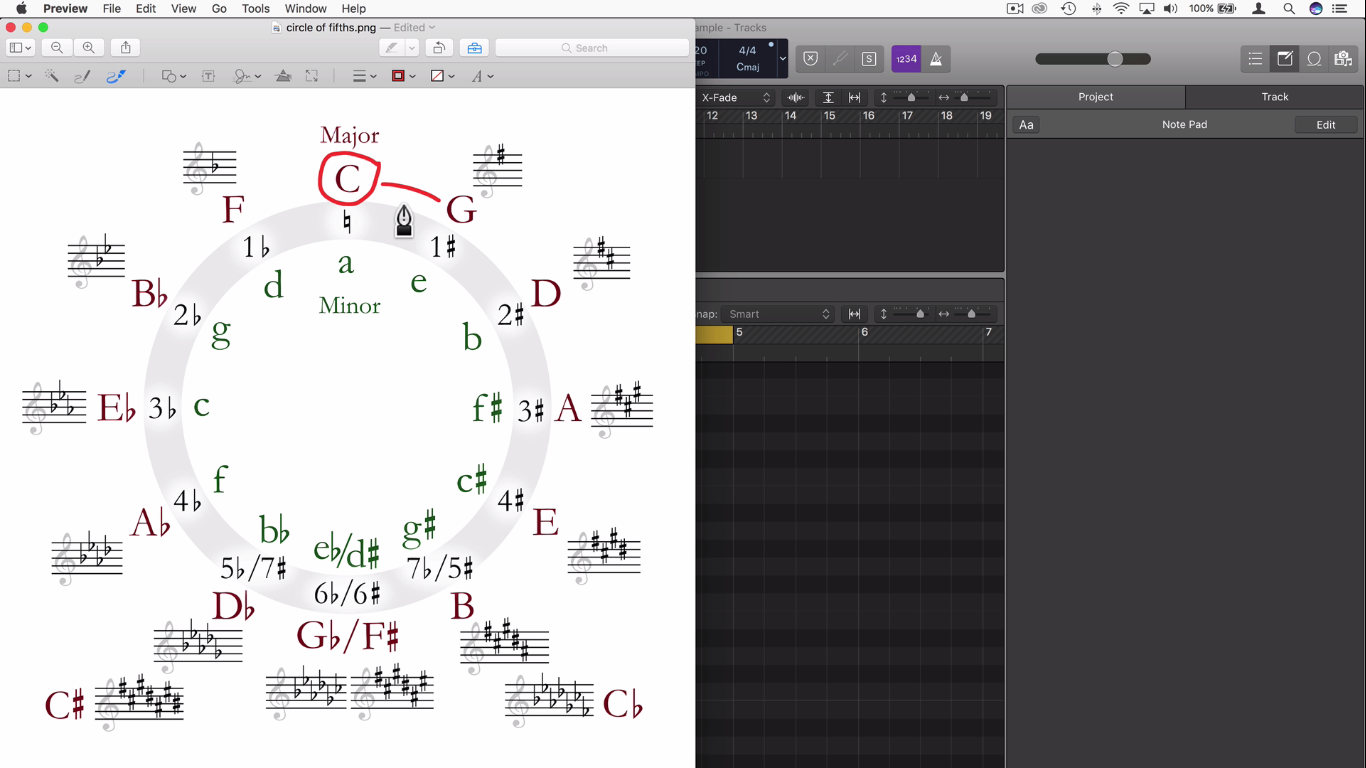 It's called the circle of 5ths because it quite literally goes round in 5ths. If we start on ‘C’ here and we go around clockwise, ‘C’ to ‘G’ is actually a perfect 5th. 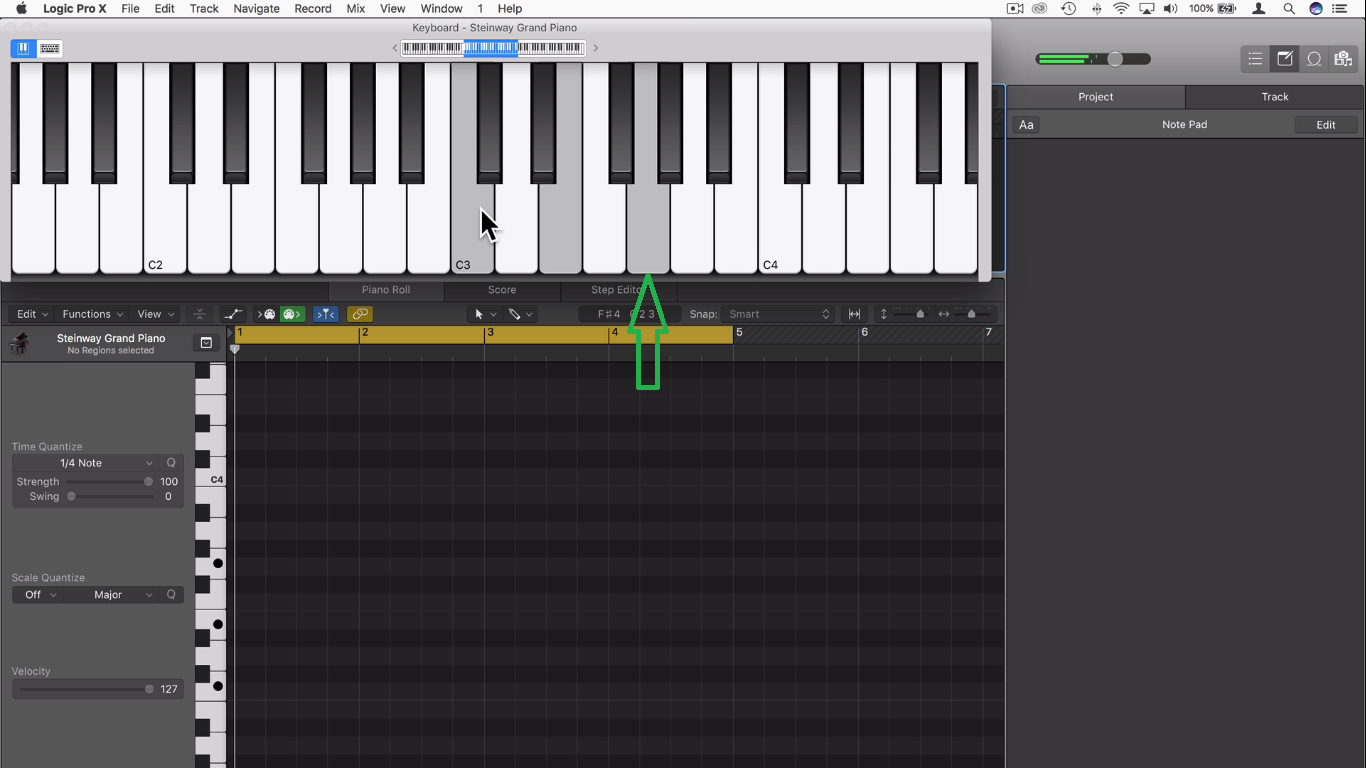 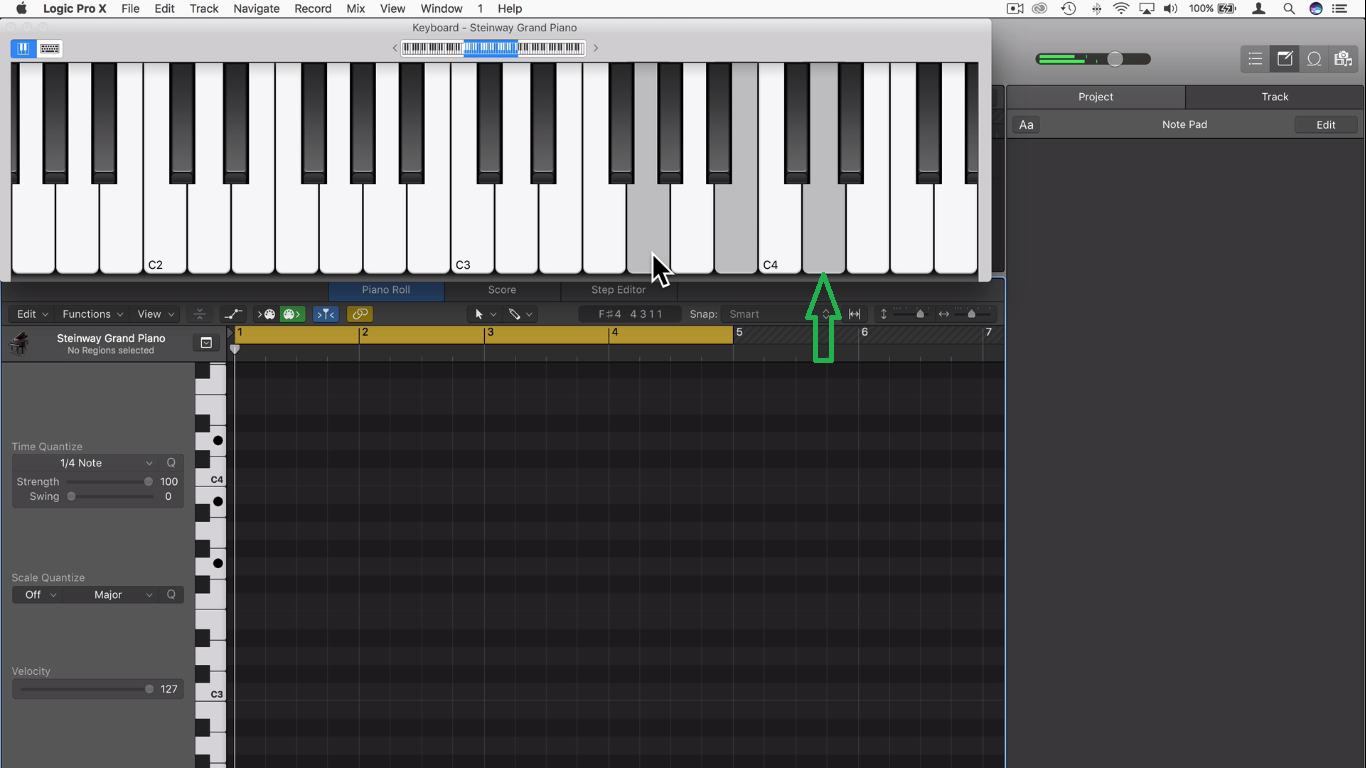 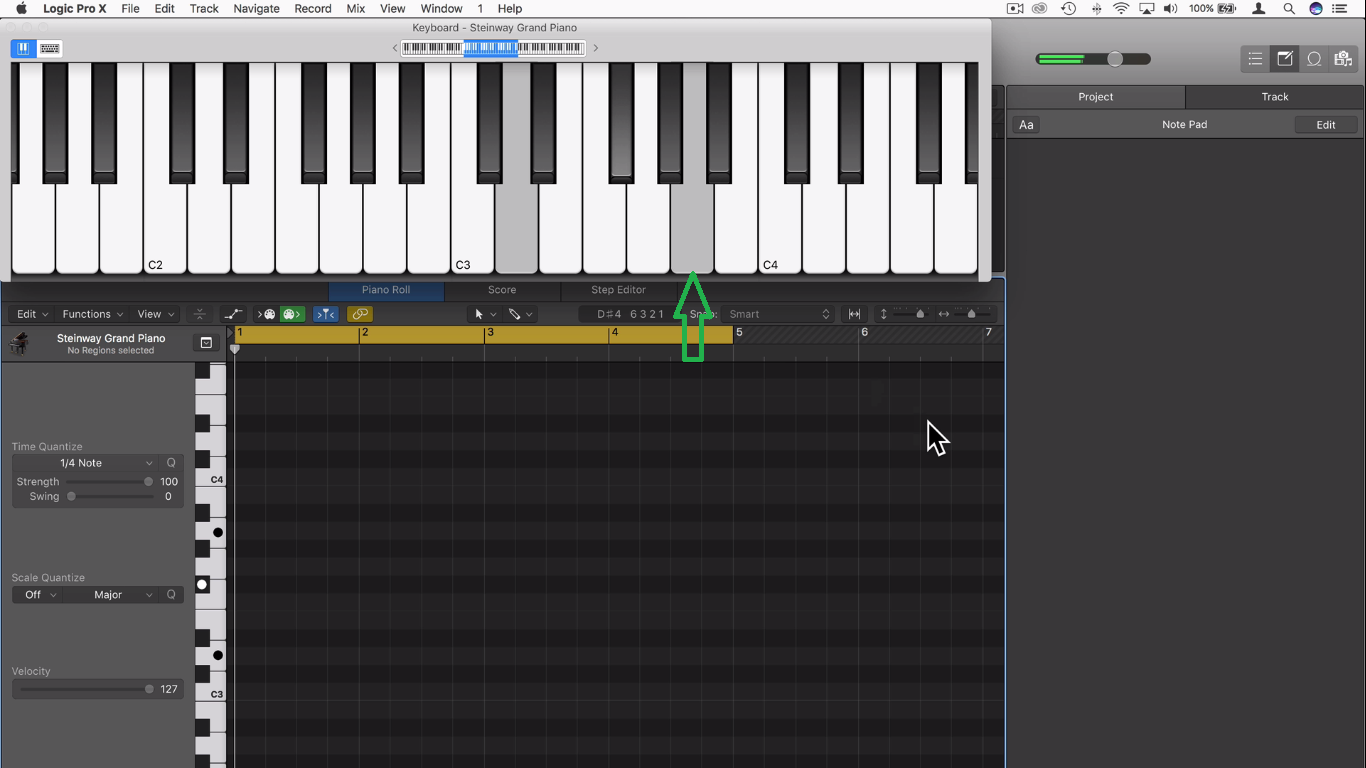 Now, going back to the circle of 5ths, the next one is an ‘A’. It just goes in 5ths all the way around until we go back to ‘C’ and it repeats.

Each time you go around the circle of 5ths, we're actually adding a sharp. 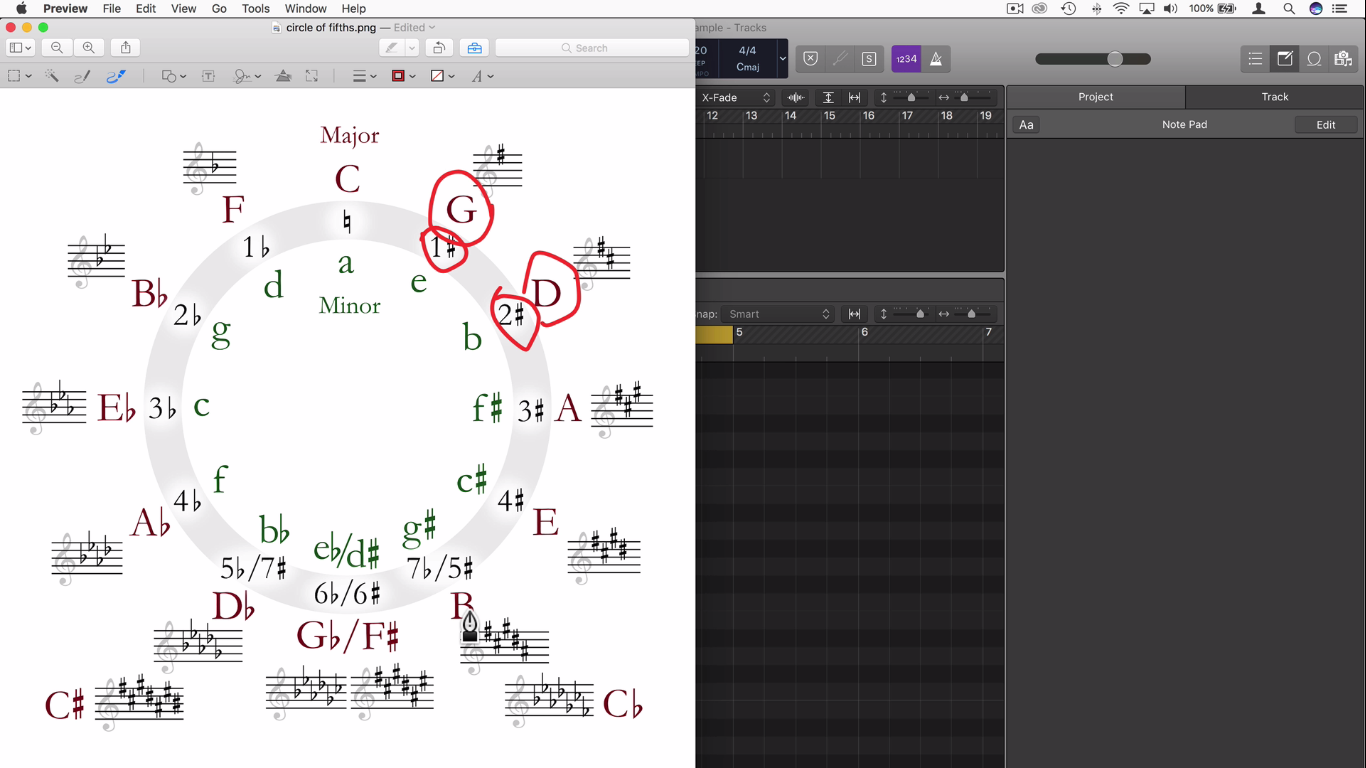 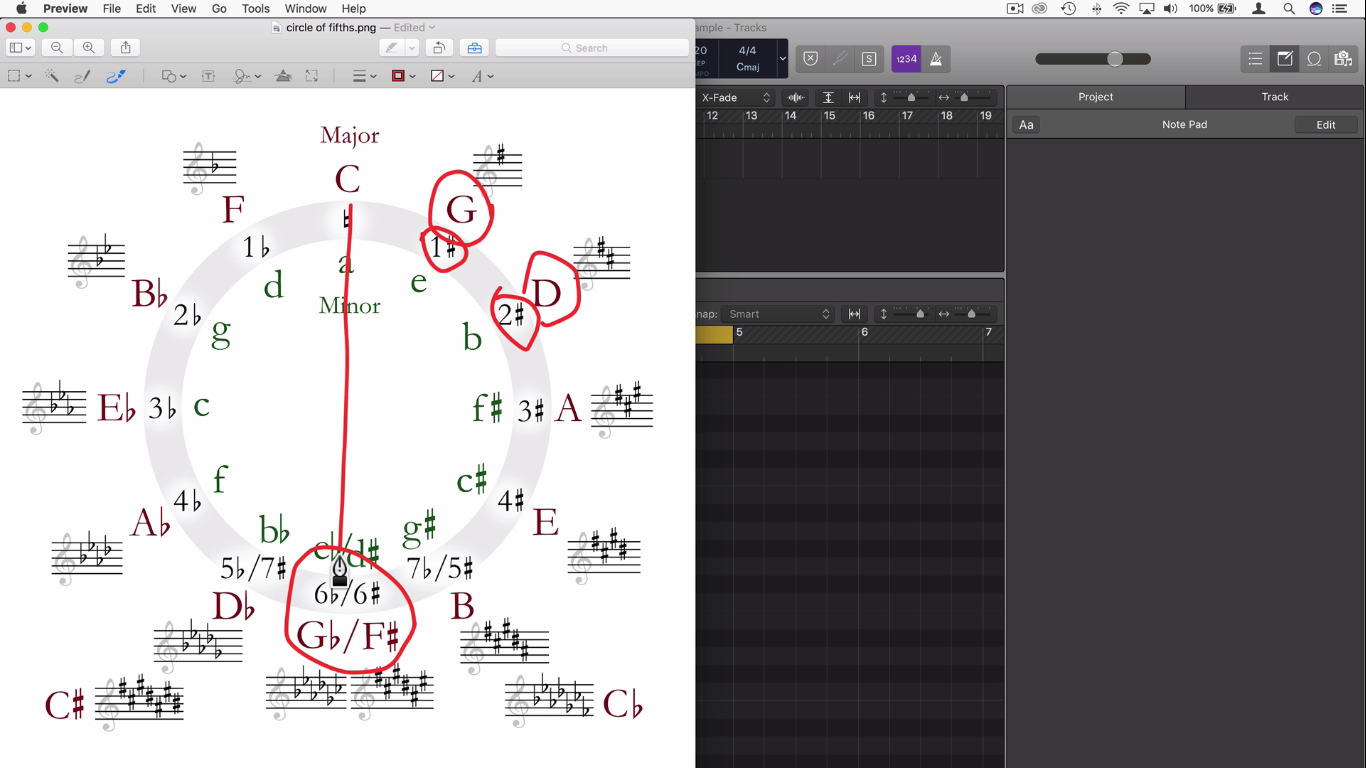 When we get to ‘F#’, it actually changes to flats. There are a few different ways to do this. You can change the flats a bit earlier or later but I like to do ‘F# ’ so it's bang in the middle. 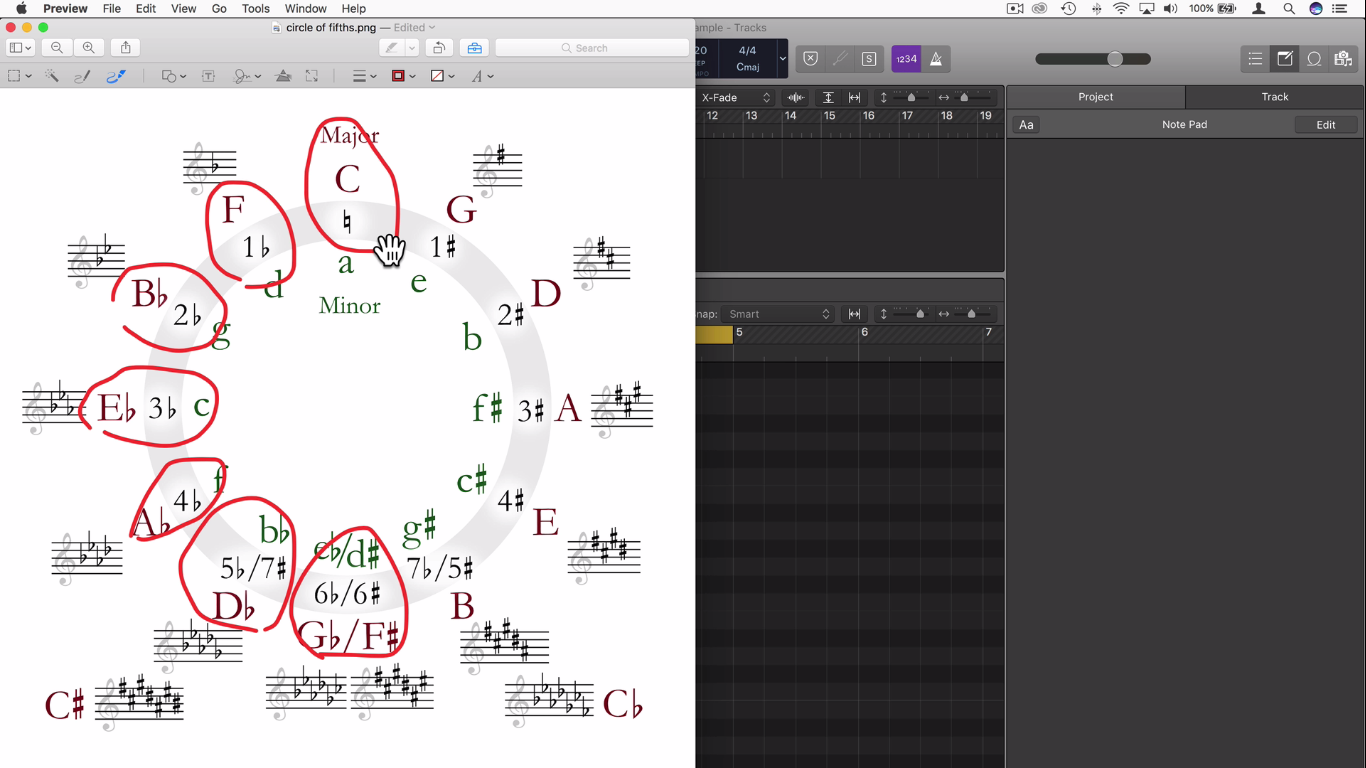 Around the circle of 5ths, we add a sharp each time until we get to the middle of it i.e. F# and then we're actually taking away flats. 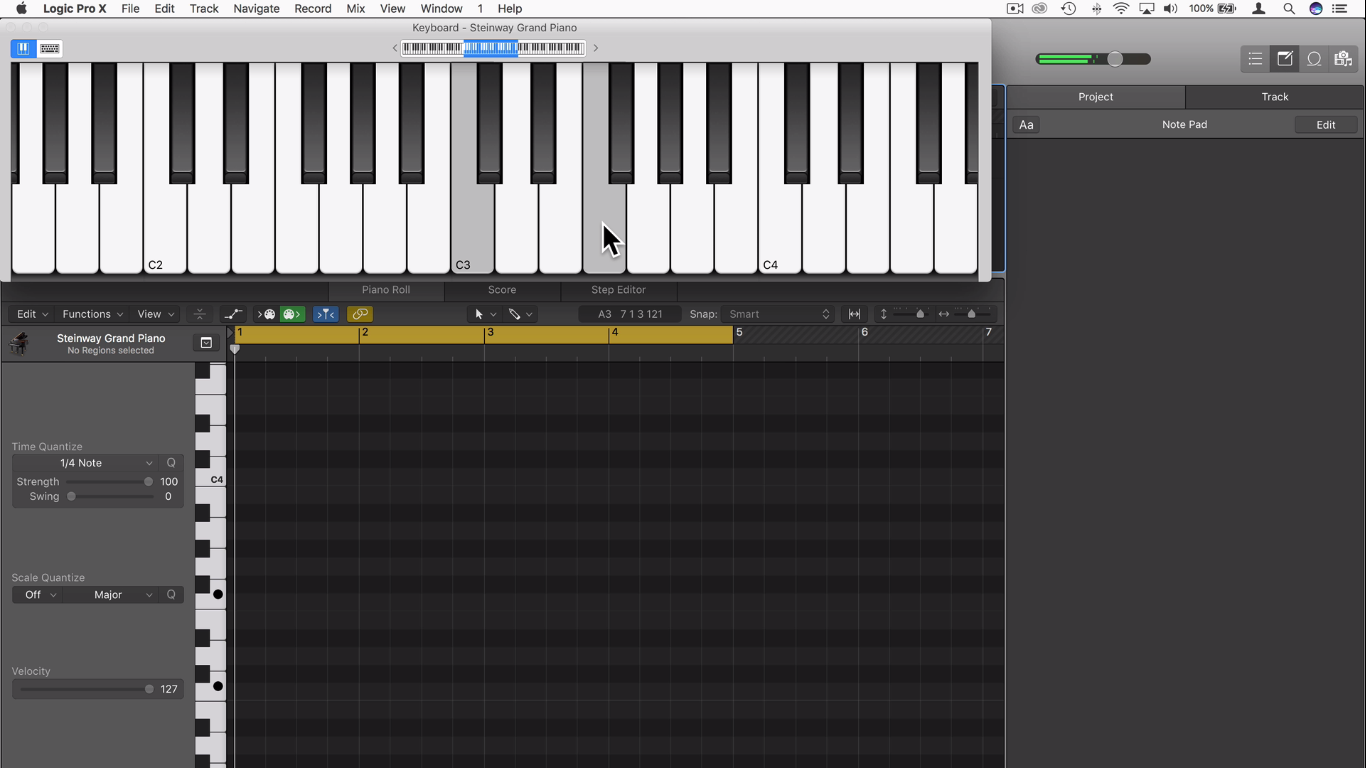 If we go the opposite way i.e. anti-clockwise. It will be ‘C’ to ‘F’. This is actually a perfect 4th because if you have a perfect 5th and you invert it, this will make a perfect 4th. 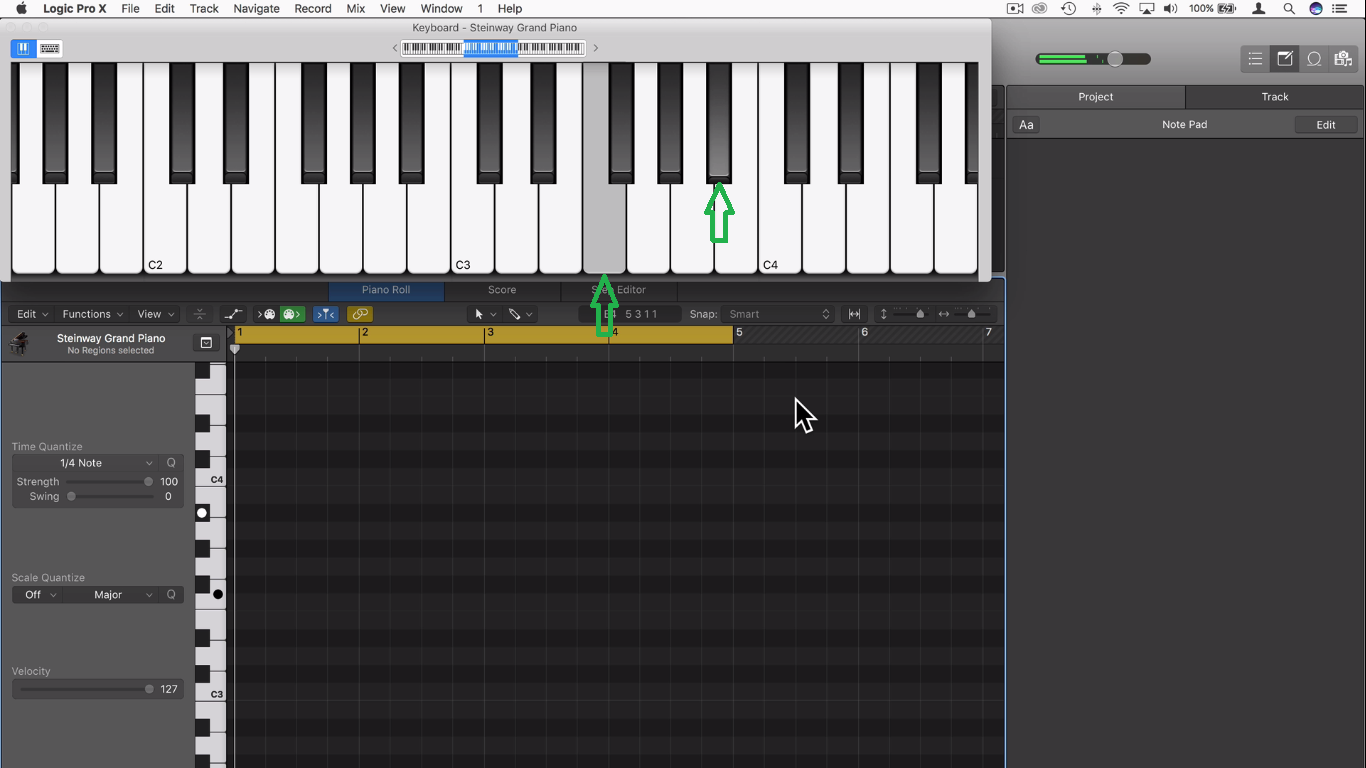 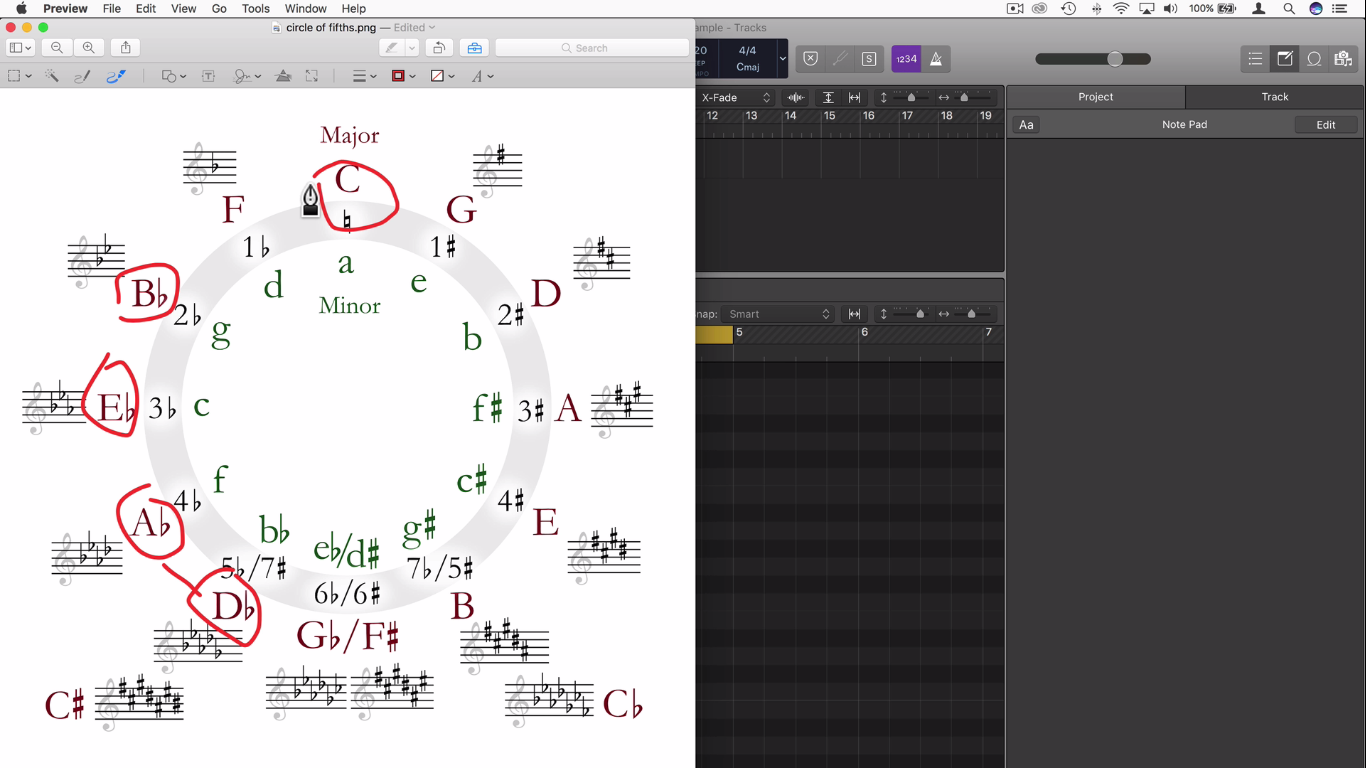 This can allow you to quickly work out what key is next to the one you're currently on. 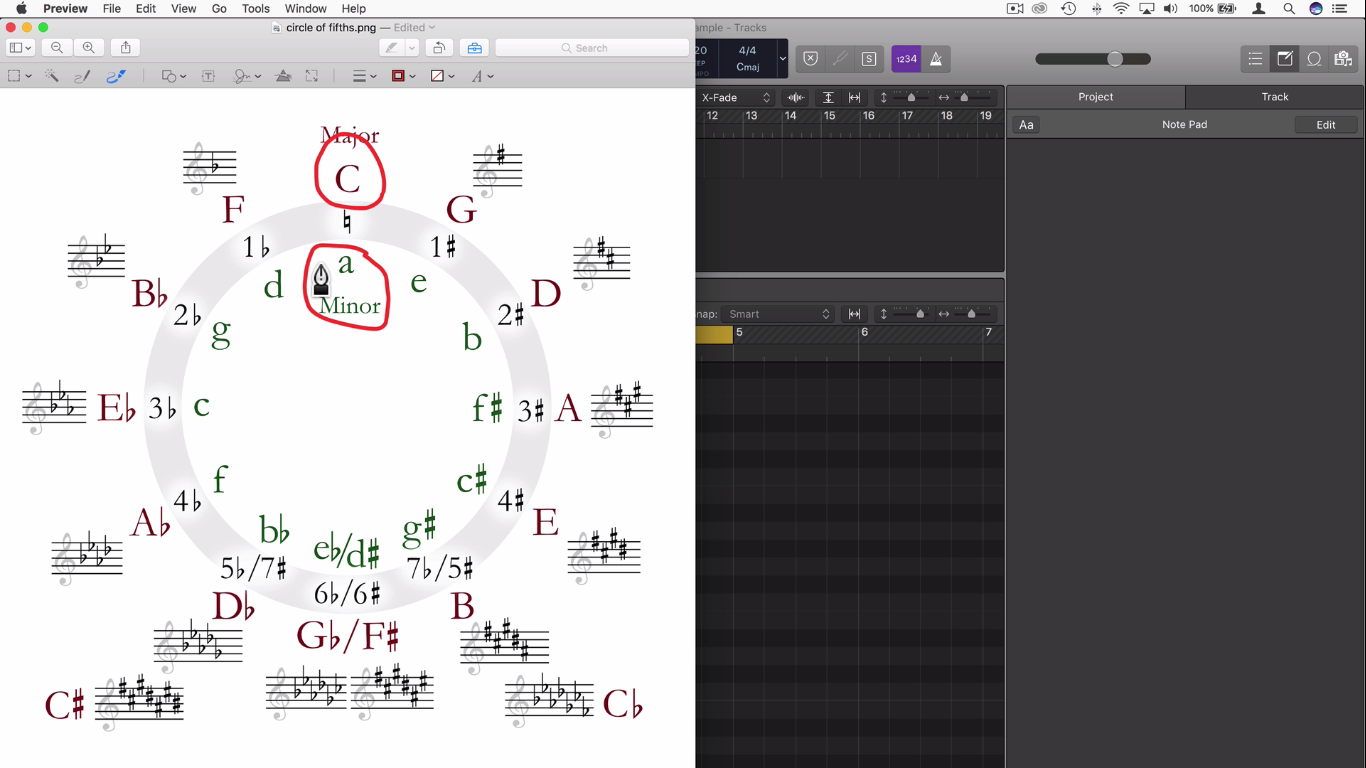 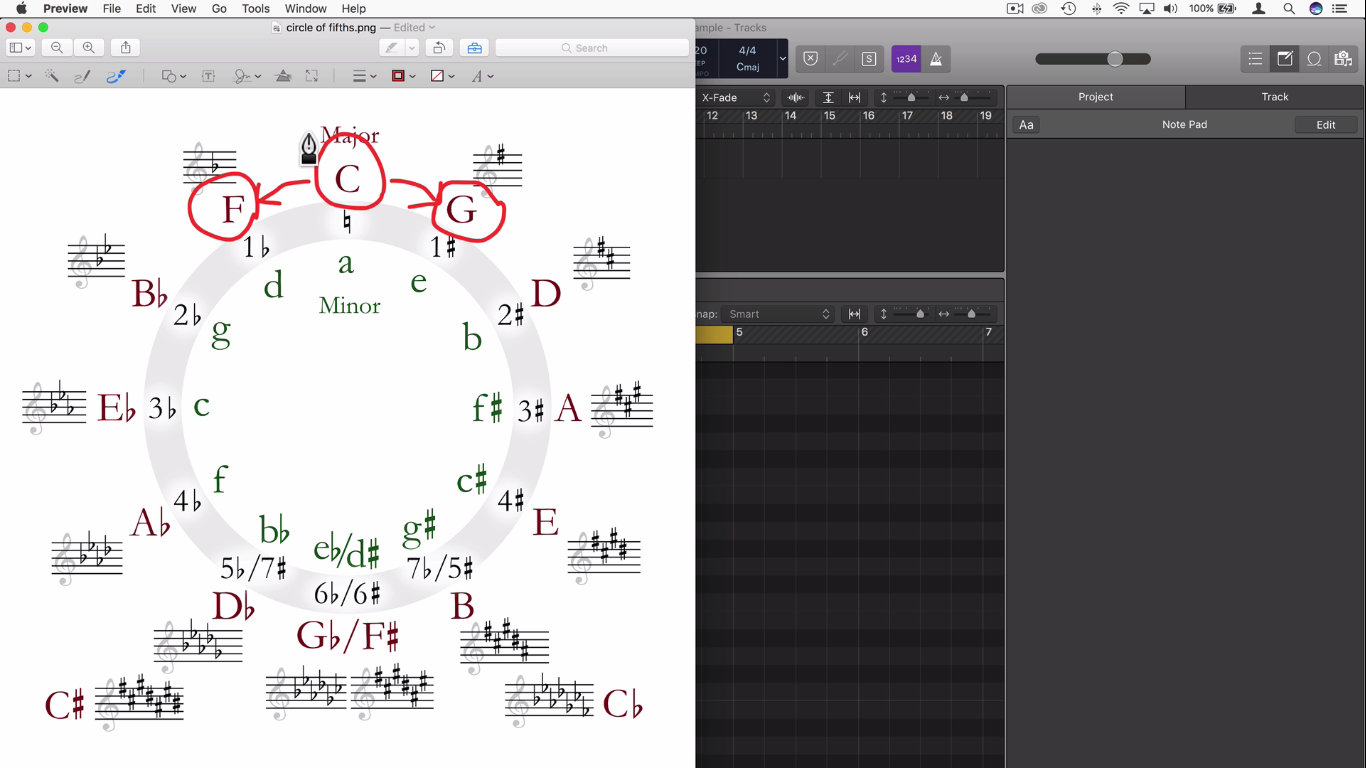 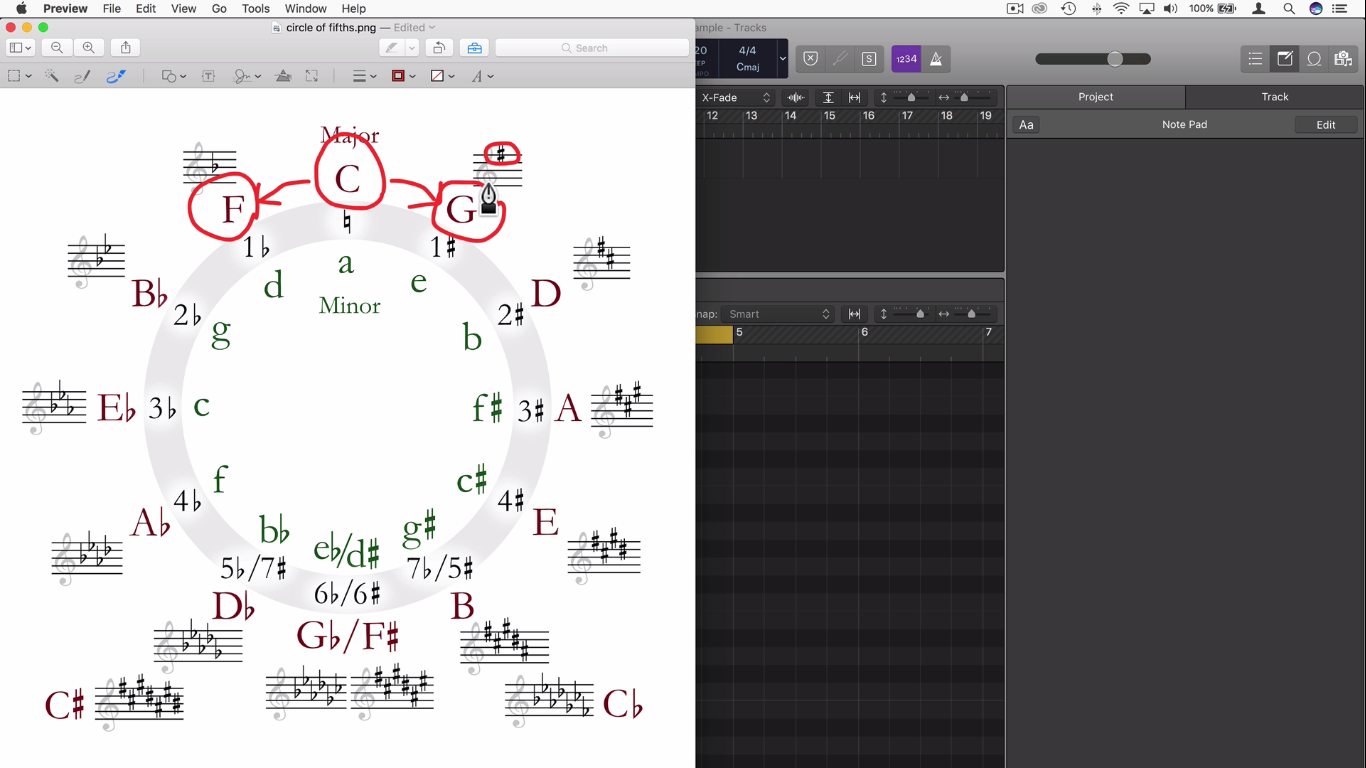 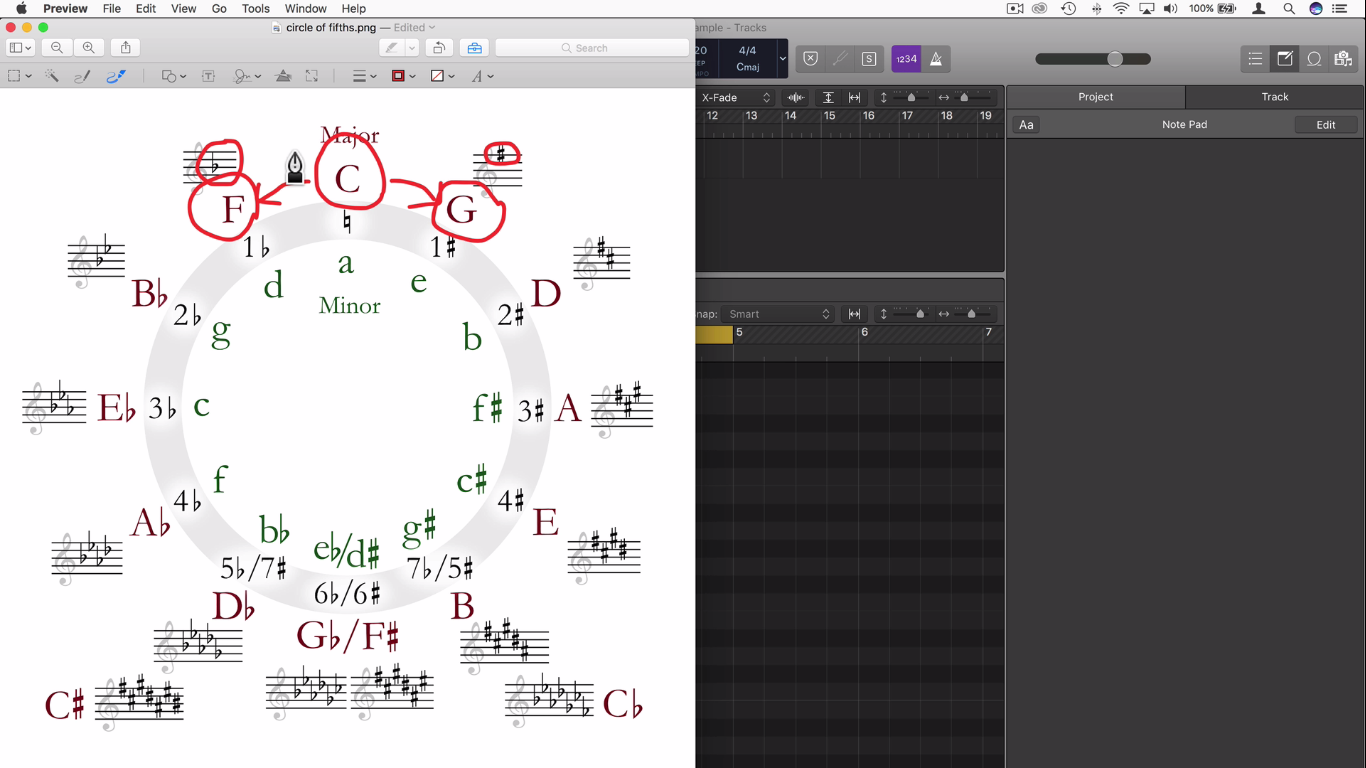 If we go anti-clockwise to ‘F’, this has a ‘Bb’. This is just one note difference as well. It won't sound too different if you temporarily move to one of these keys. 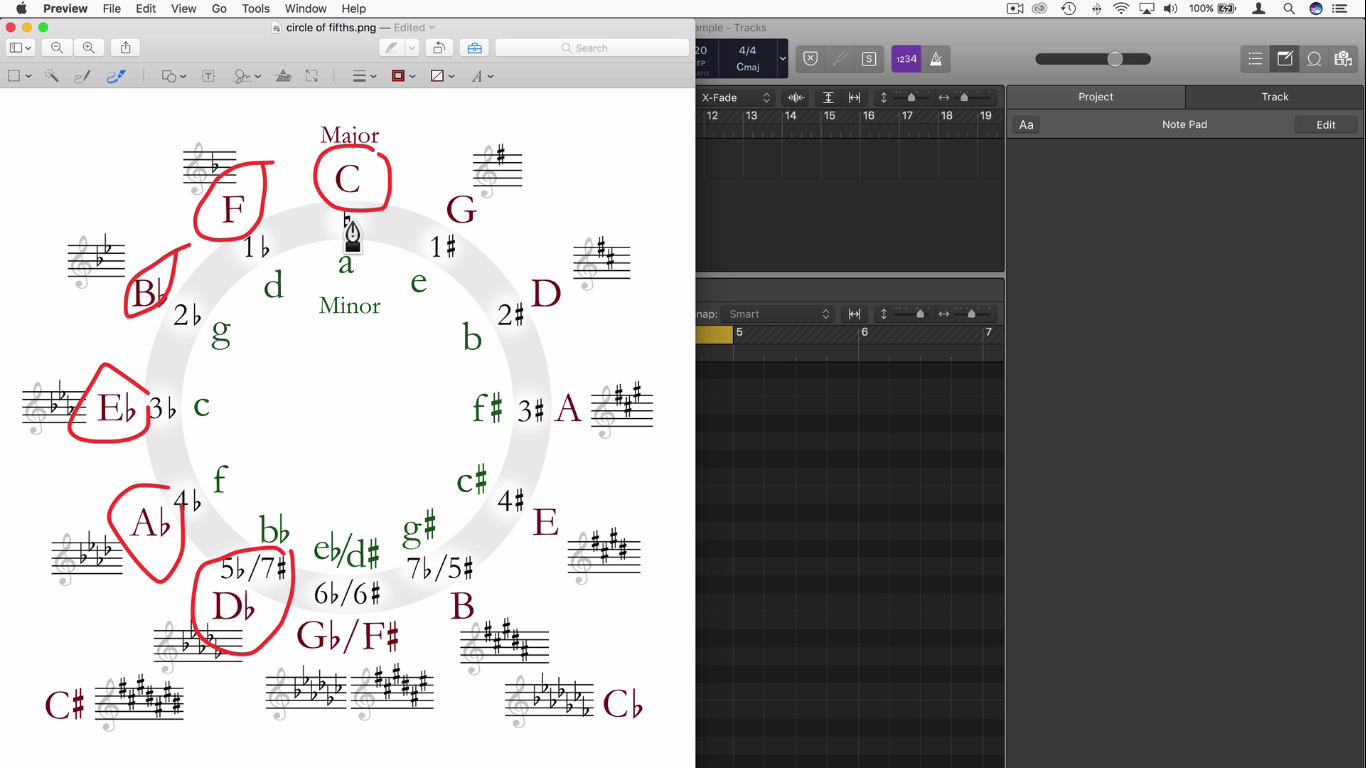 However, if we do want to move to say a ‘Db’ which is quite far away from a ‘C’, there are a few ways we could do this. We could either go around the circle of 5ths and gradually move around until we get to ‘Db’ or we could just abruptly go to ‘Db’. It could sound a little strange.

It's a lot easier just to go to the keys that are next to the one you're working on which is why this circle of 5ths is really handy. It is because we can just quickly see which keys we can go to? How many sharps or flats they have and also their relative ‘E-Minors’?

‘A’ will be the ‘A-Minor’. An ‘A-Minor’ actually has the same notes as the ‘C-Major’ but in a different order. 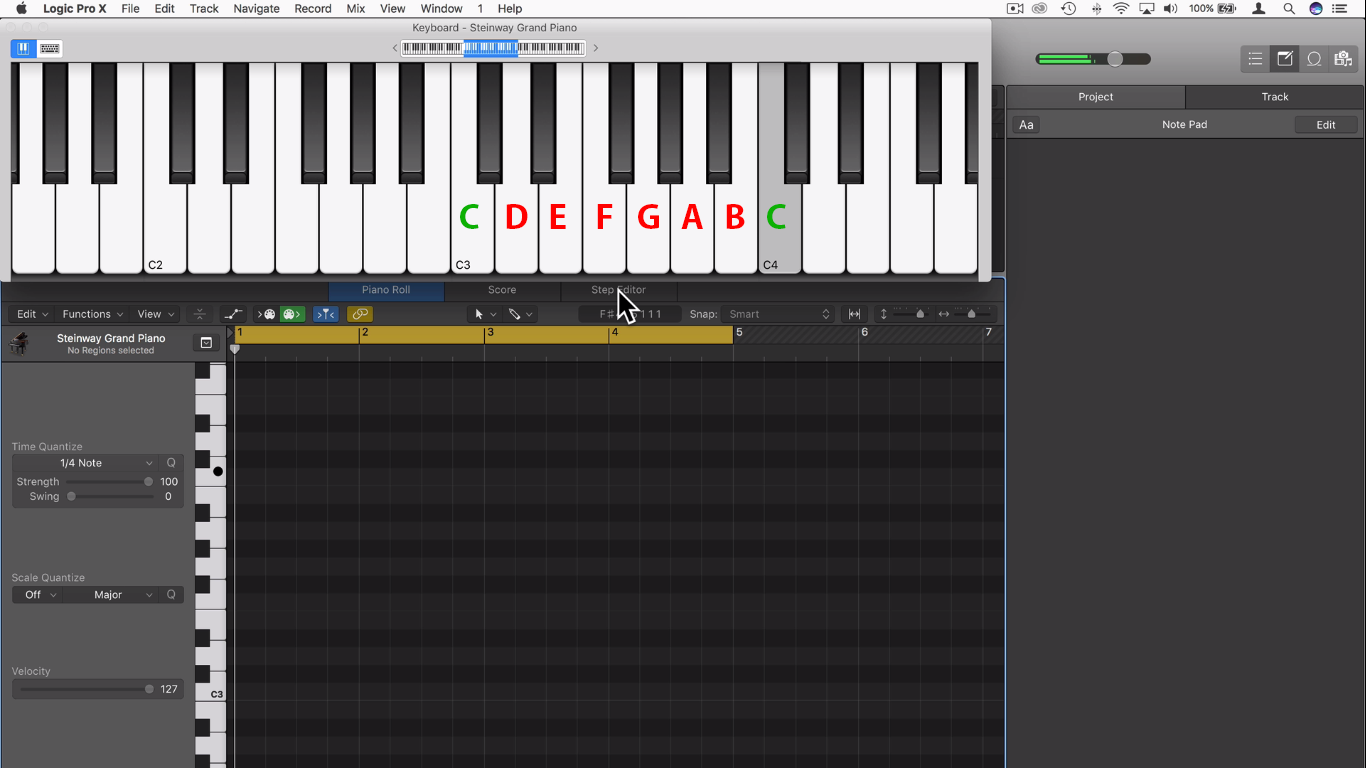 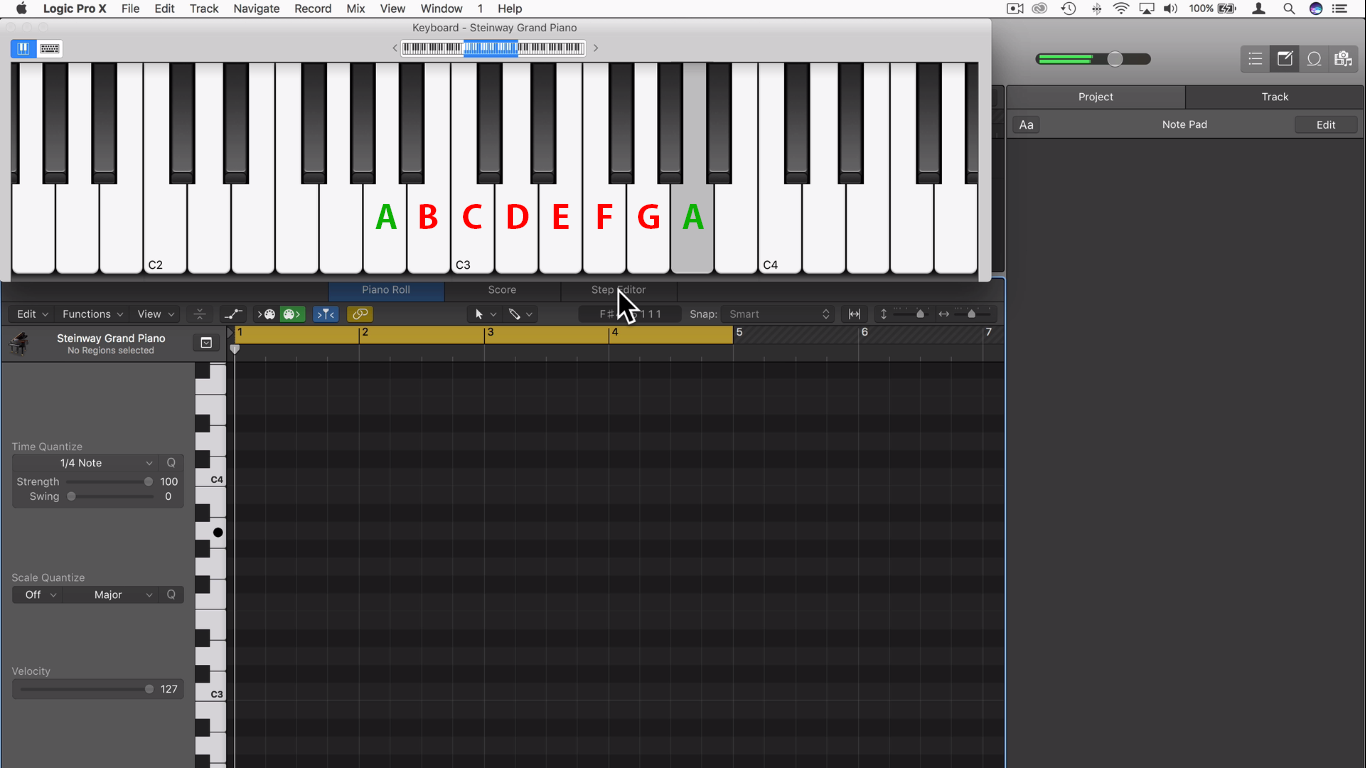 For A, it’s A, B, C, D, E, F, G, A. It's the same notes but in a different order really. It’s starting on the 6th note. This is really a type of mode. We will have a look at modes later on but it's easier to think of this as the relative ‘E-Minor’.

Just think of the E-Major scale whichever major scale is starting on the 6th note above that will give you the relative ‘E-Minor’ scale. 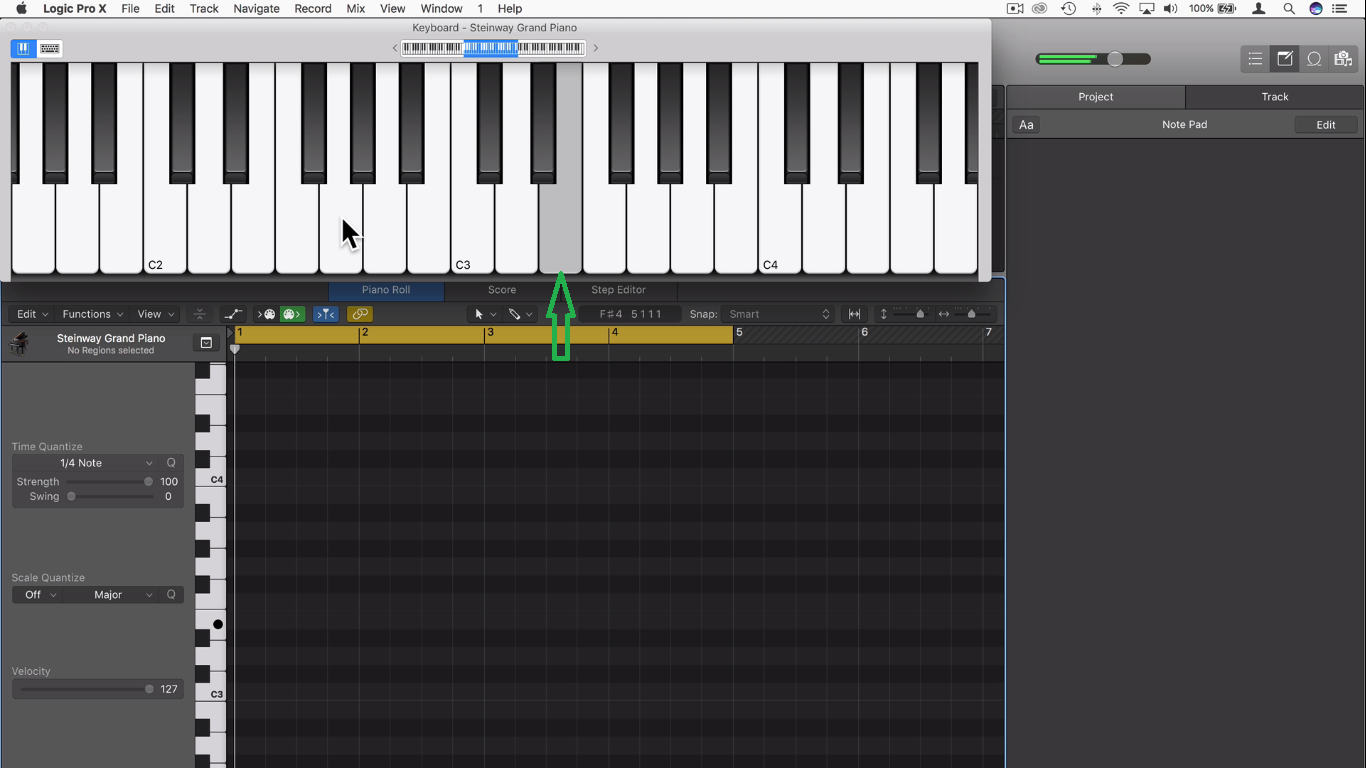 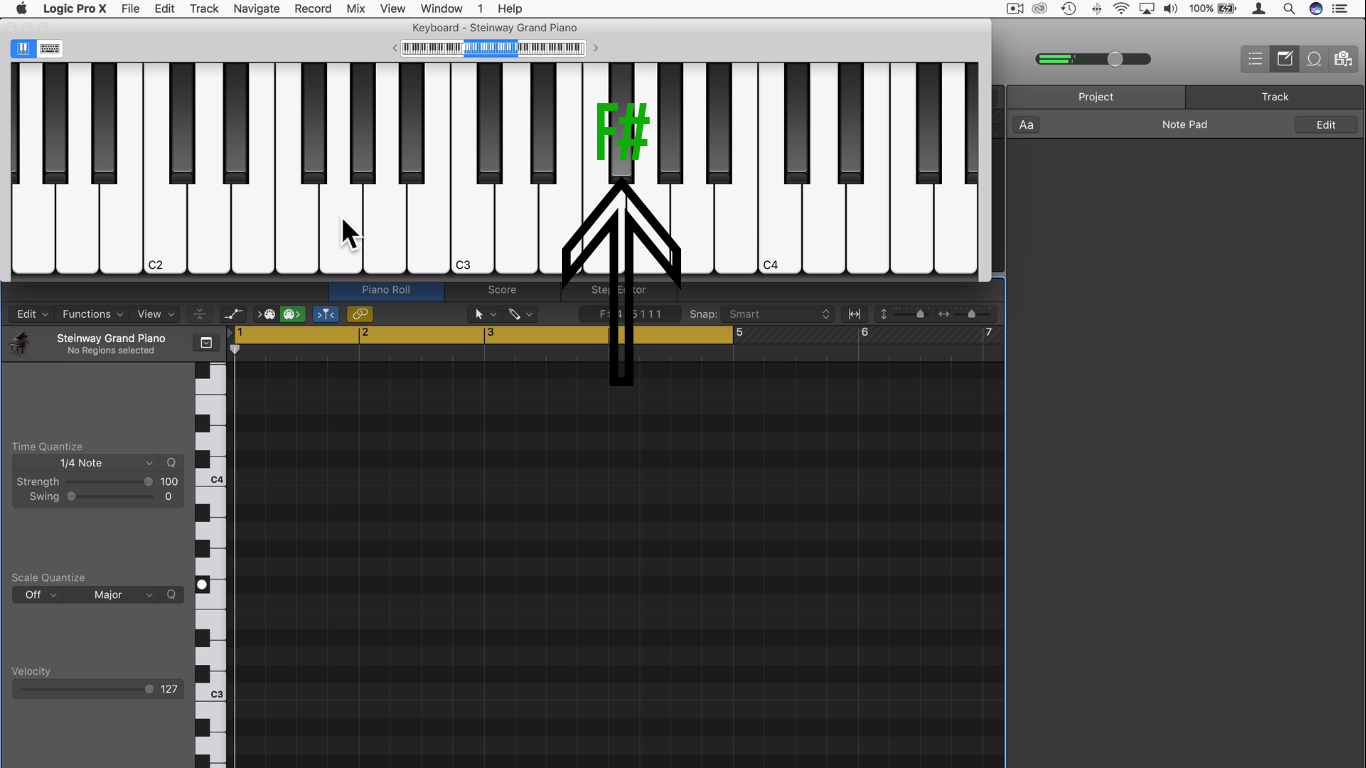 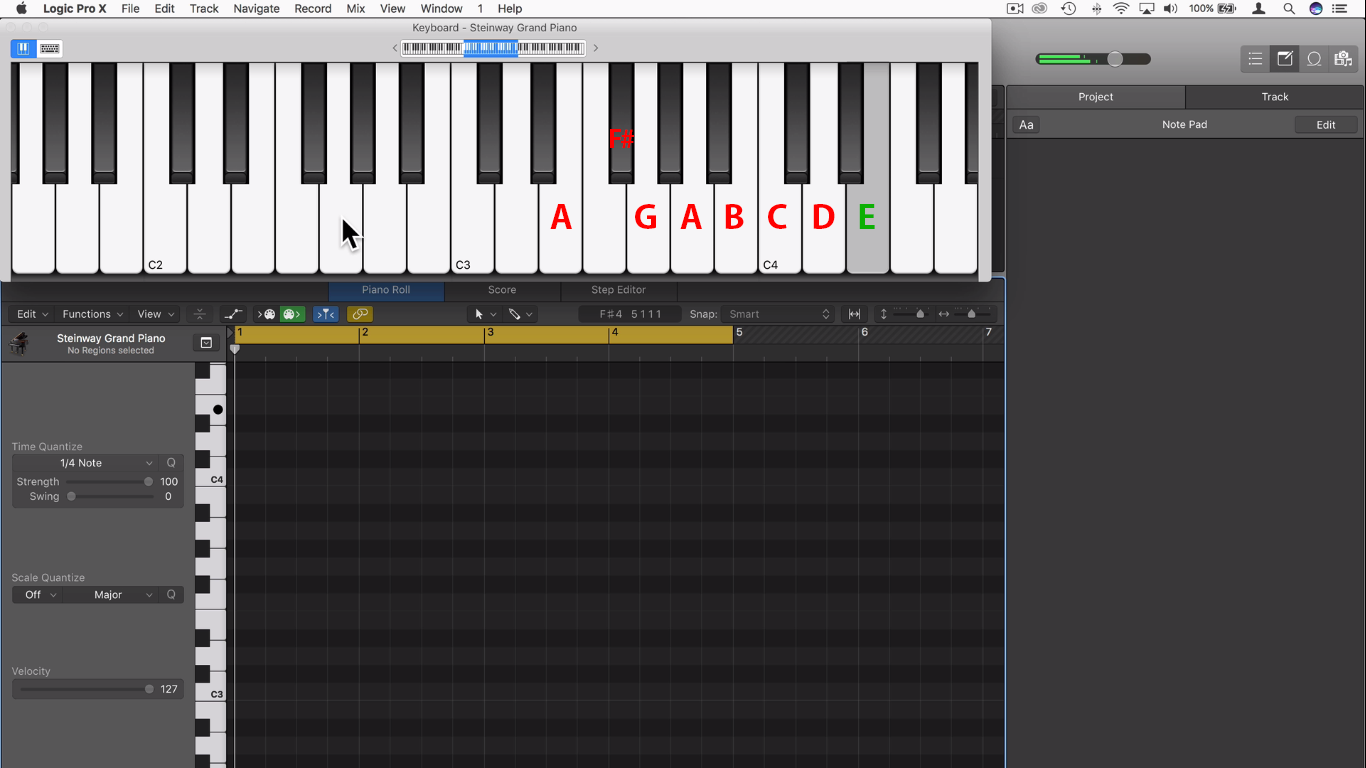 We're going to be looking at minor scales in more detail later on but just as an example so you may understand the circle of fifths. The relative ‘E-Minor’ is a different scale but it has the same notes as the E-Major scale but it starts on the 6th note of the scale.

It’s the same for all of the other minors and if we go around this inner circle, this is the same as well. One-fifth from ‘a’ we give as ‘e’, a 5th above ‘e’ will give us ‘b’ and continuing, it will be a 5th all the way around. 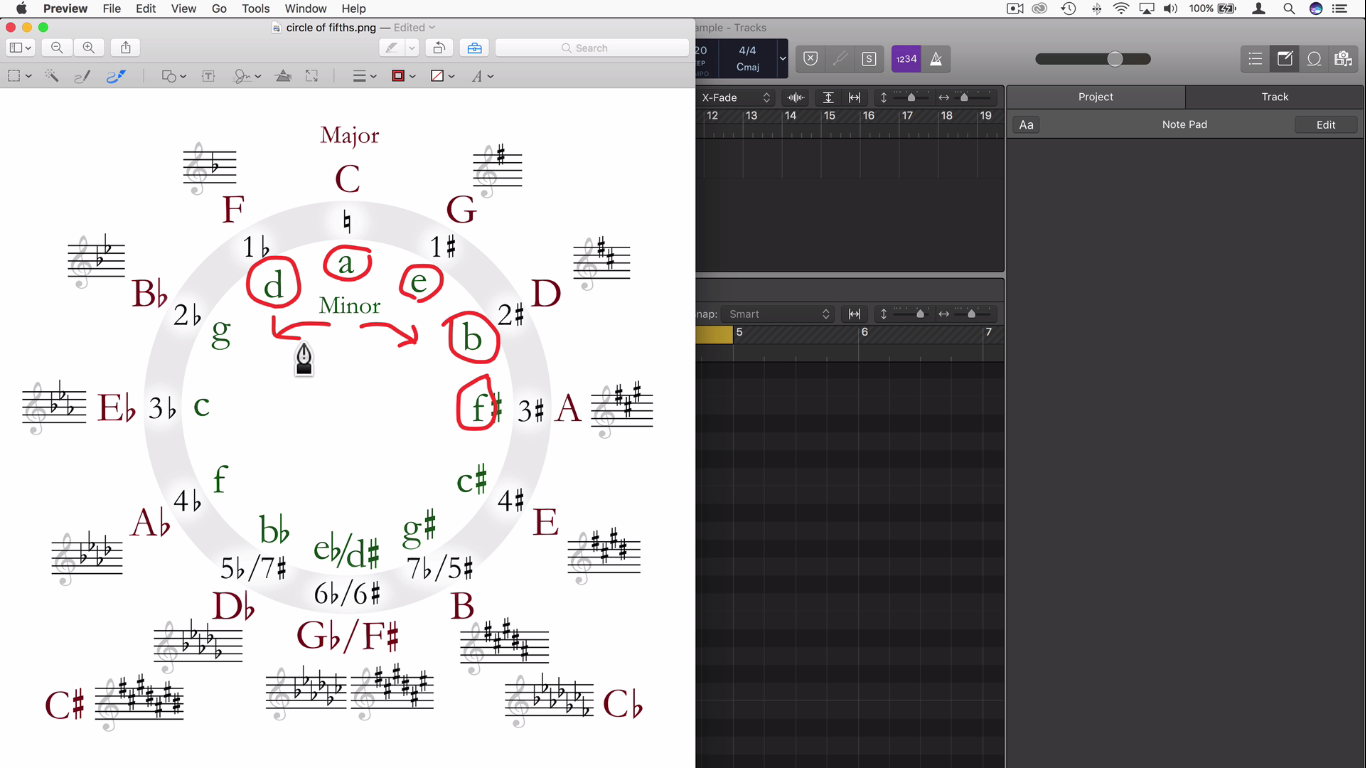 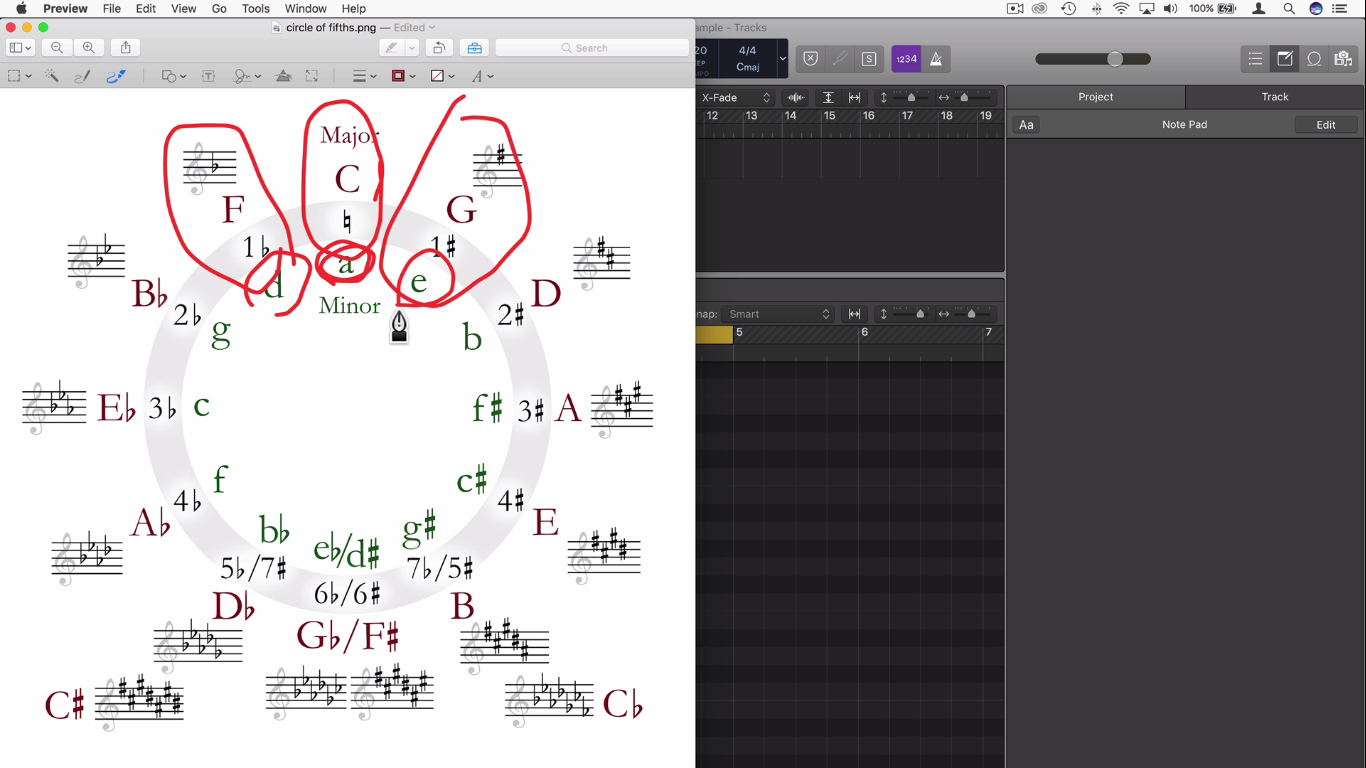 Having a look at the circle of fifths gives us loads of options. If we're in ‘C’, we know that we have the 7 chords of ‘C-Major’ but we also know you can borrow some of these chords from ‘G-Major’, some of the chords from ‘F-Major’ and also this ‘A-Minor’ which is a relative ‘E-Minor’ or maybe the ‘D-Minor’ and the ‘E-Minor’. 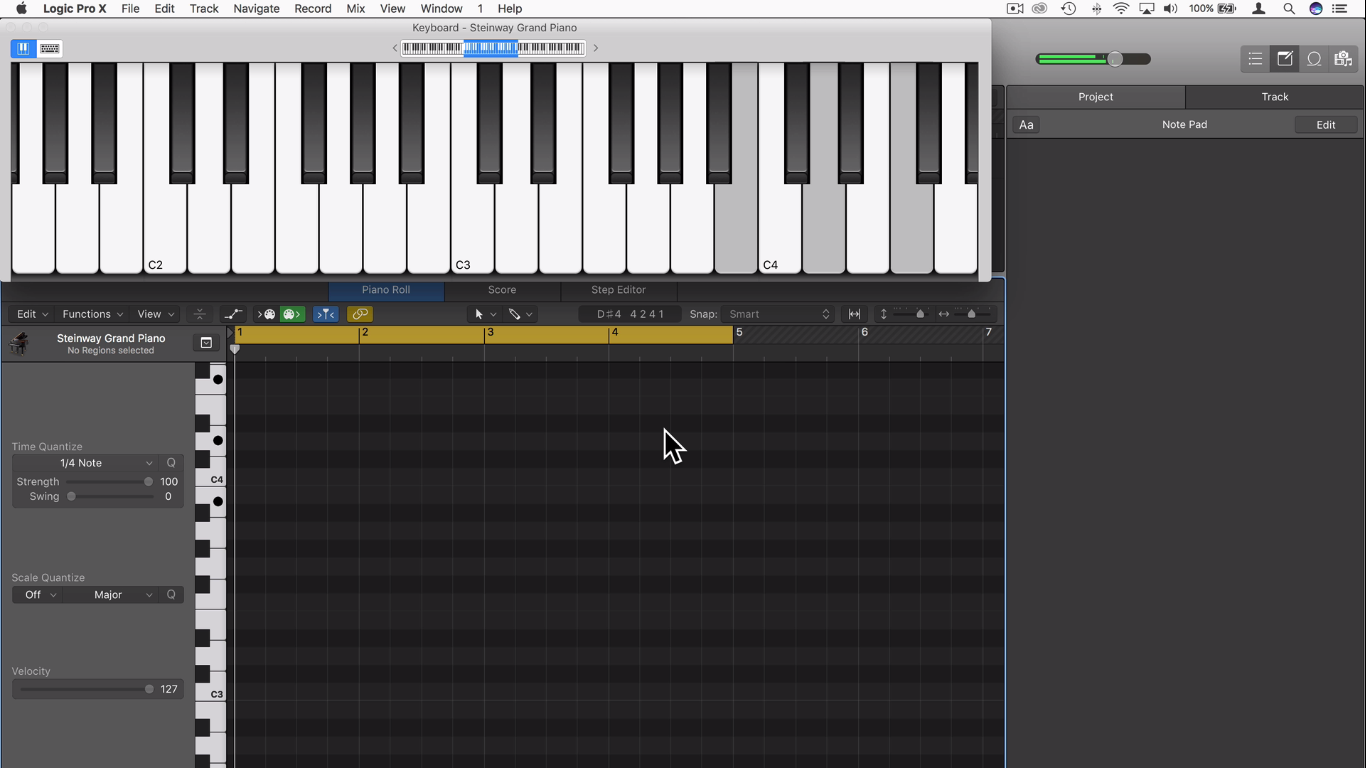 What we can do is use the circle of 5ths and borrow a chord from ‘G-Major’. ‘G-Major’ doesn't have to be diminished. 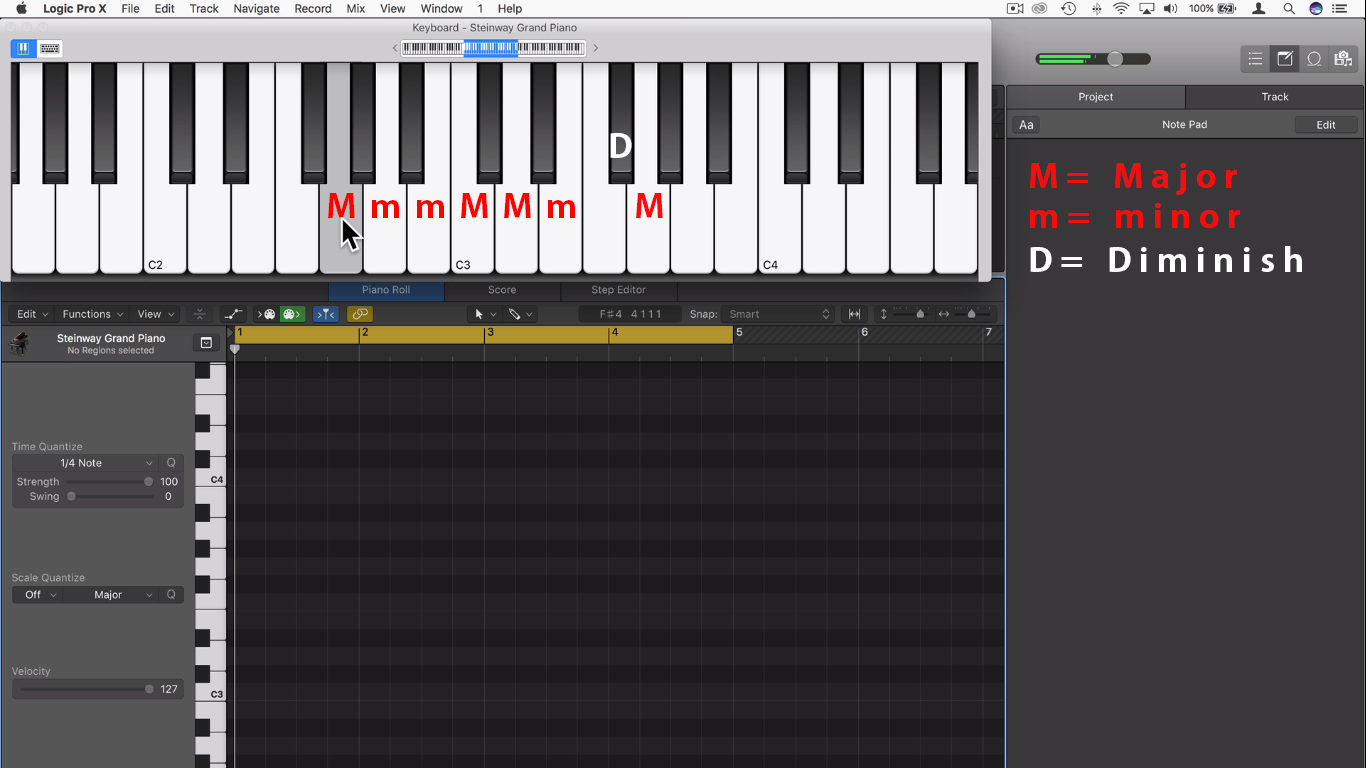 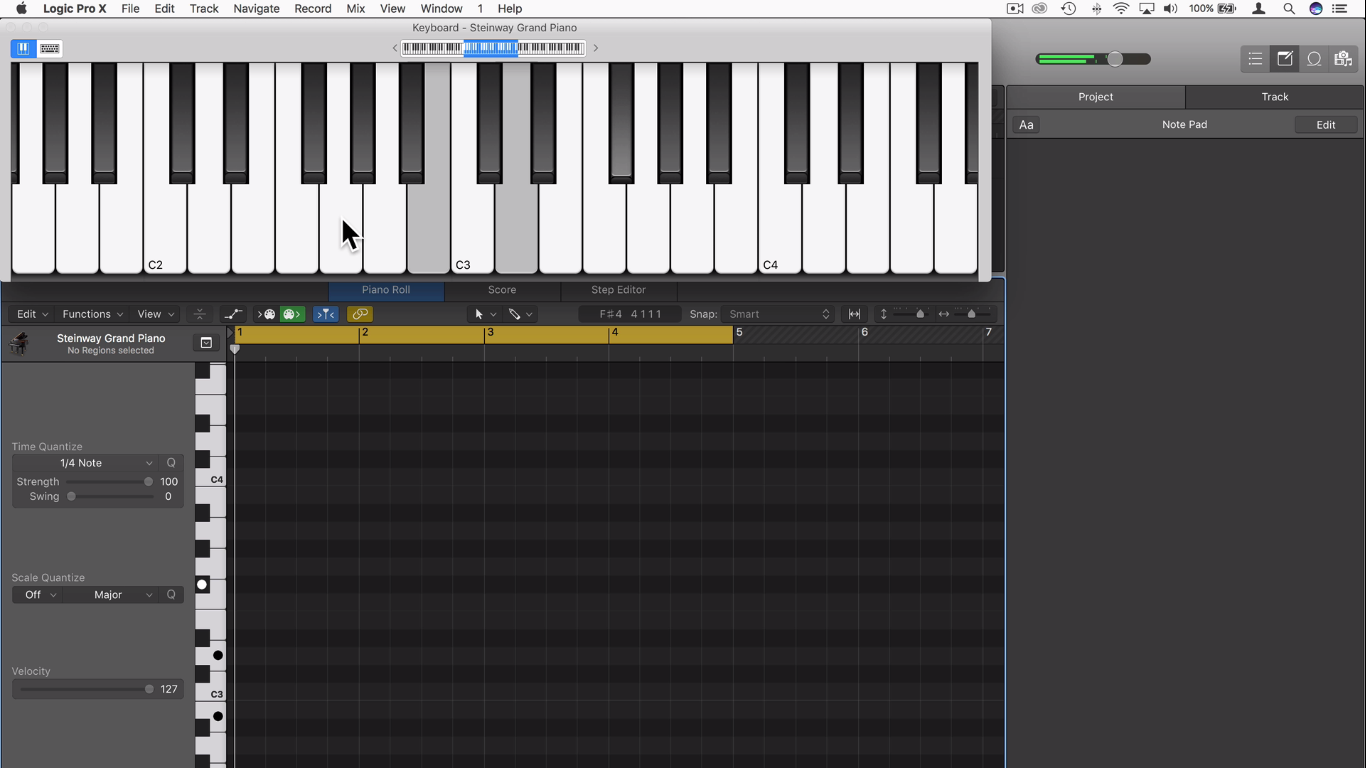 We could borrow this ‘B-minor’ if we wanted to.

We can go back to ‘C’. We don't have to stay in this key. We can just temporarily use some of the notes.

We can do the same going to ‘F’, we can add a ‘Bb’. If we want a new chord, we can borrow a chord from another closely related key which in this case is ‘F-Major’. So say we're in ‘C-Major’ and we're playing some notes. We don't want to use ‘B-diminish’ because it sounds a bit strange. 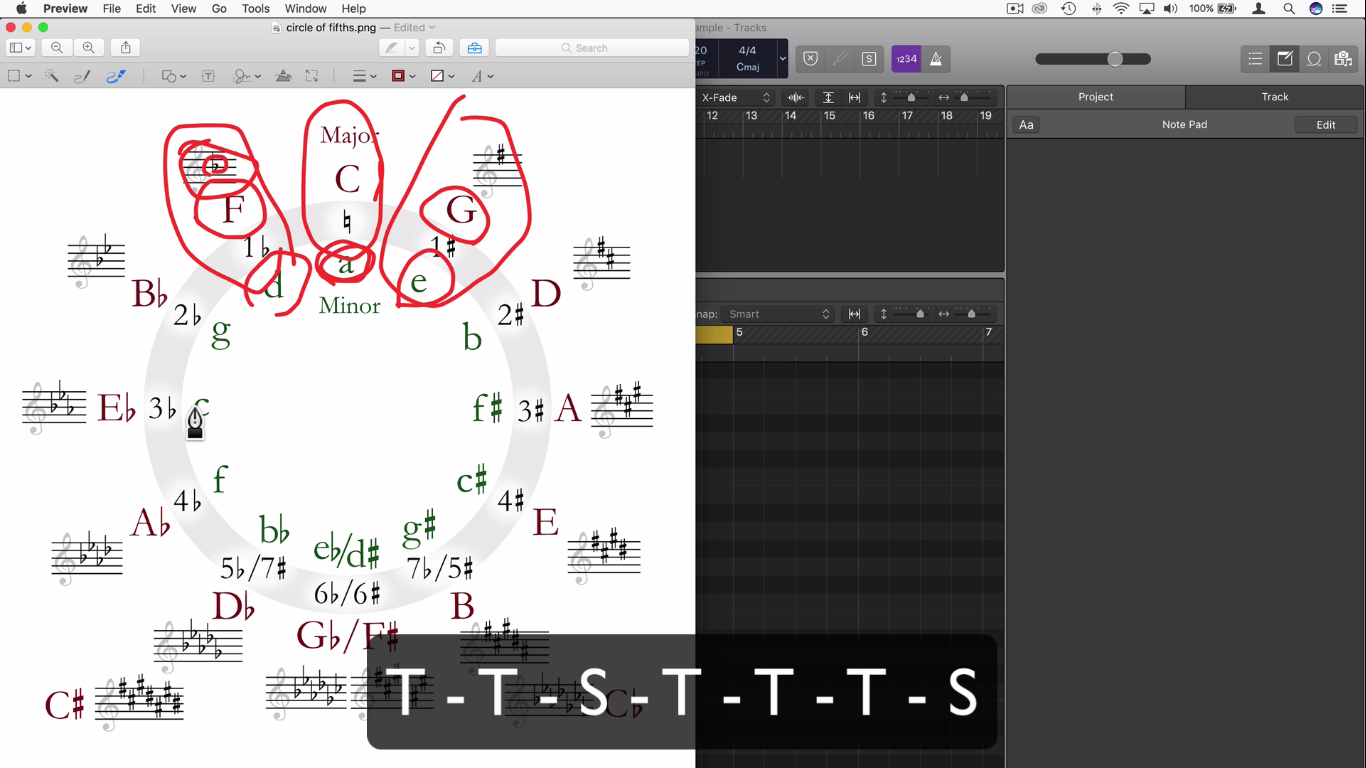 We could just modulate to ‘F-Major’ and if we have a look at ‘F-Major’, you’ll realize that it doesn't have a ‘B-natural’. It has a ‘Bb’.

If you don't want to use a diminished chord, this can be quite useful. For example, you could play ‘C-Major’ which is obviously in ‘C-Major’. We could add in a ‘Bb’ major because from looking at the circle of 5ths, it's closely related key has a ‘Bb’ rather than the ‘B-natural’ and in ‘F-Major’, the ‘Bb’ is a ‘Bb Major’ chord.

If you want a better understanding of the combinations I used, please click here.

It did fit it added a bit of colour and added a bit of interest because we're mixing stuff up a bit. We were temporarily going out of key but went back into keys. It's absolutely fine to do. 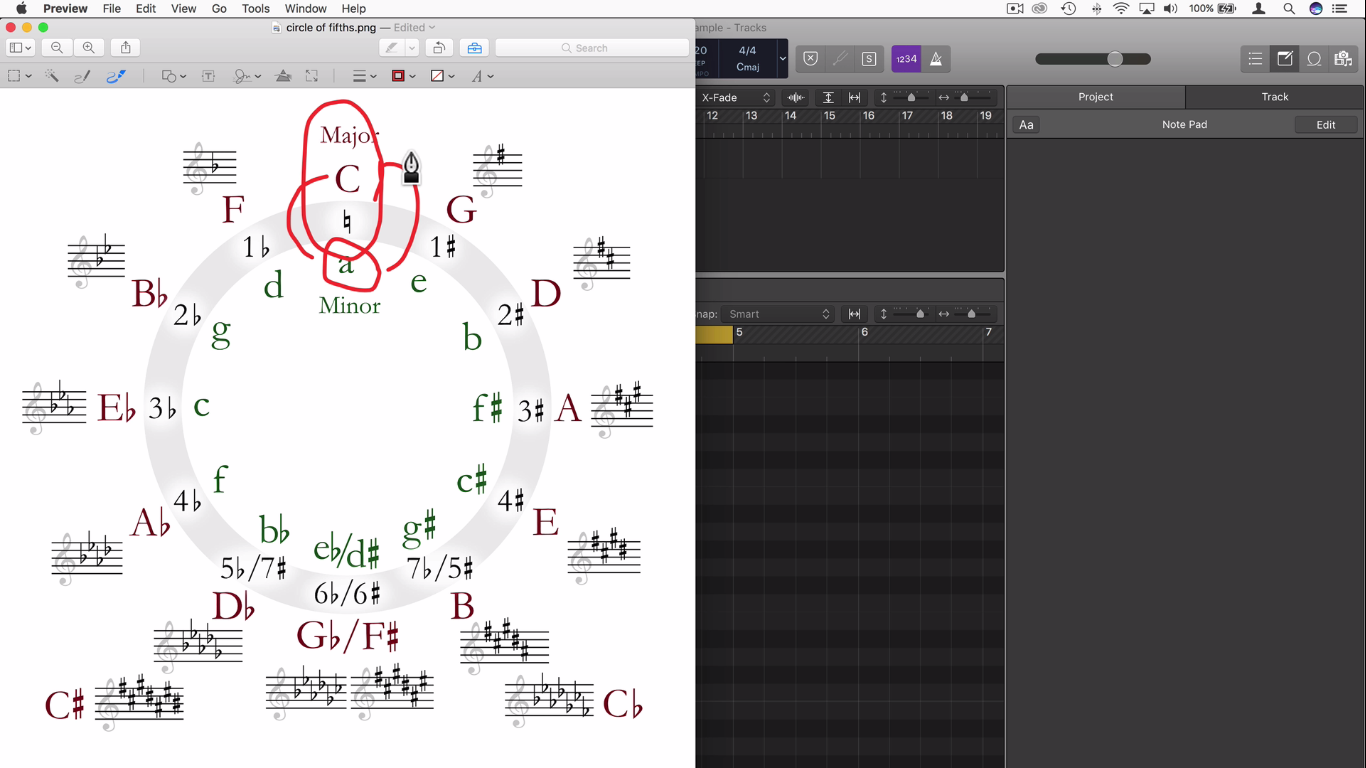 In this article, we've gone over ways of doing this temporarily. So, thank you for learning all about the circle of 5ths which is a really useful tool to know which keys you can modulate to, which Keys you can borrow notes from and which ones are closely related.