If you want to know how to reduce sibilance in vocal recordings and smooth high frequencies, the secret is the De-Esser 2 Plugin in Logic Pro X & Logic Pro 10.4.5. 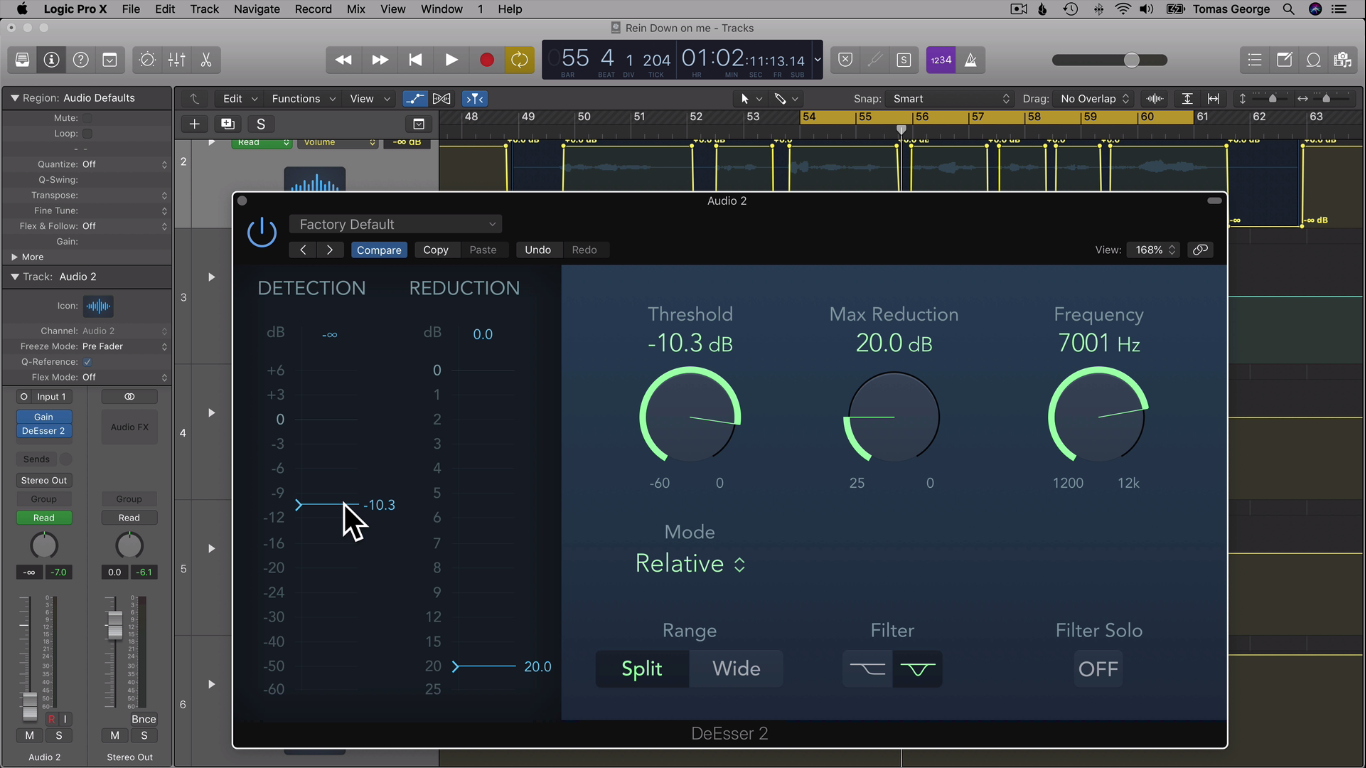 Be careful though when you're De-Essing because if you have too much of this, then it may sound like the vocalist has got a bit of a lisp but the correct amount can make a vocal recording sound less harsh. 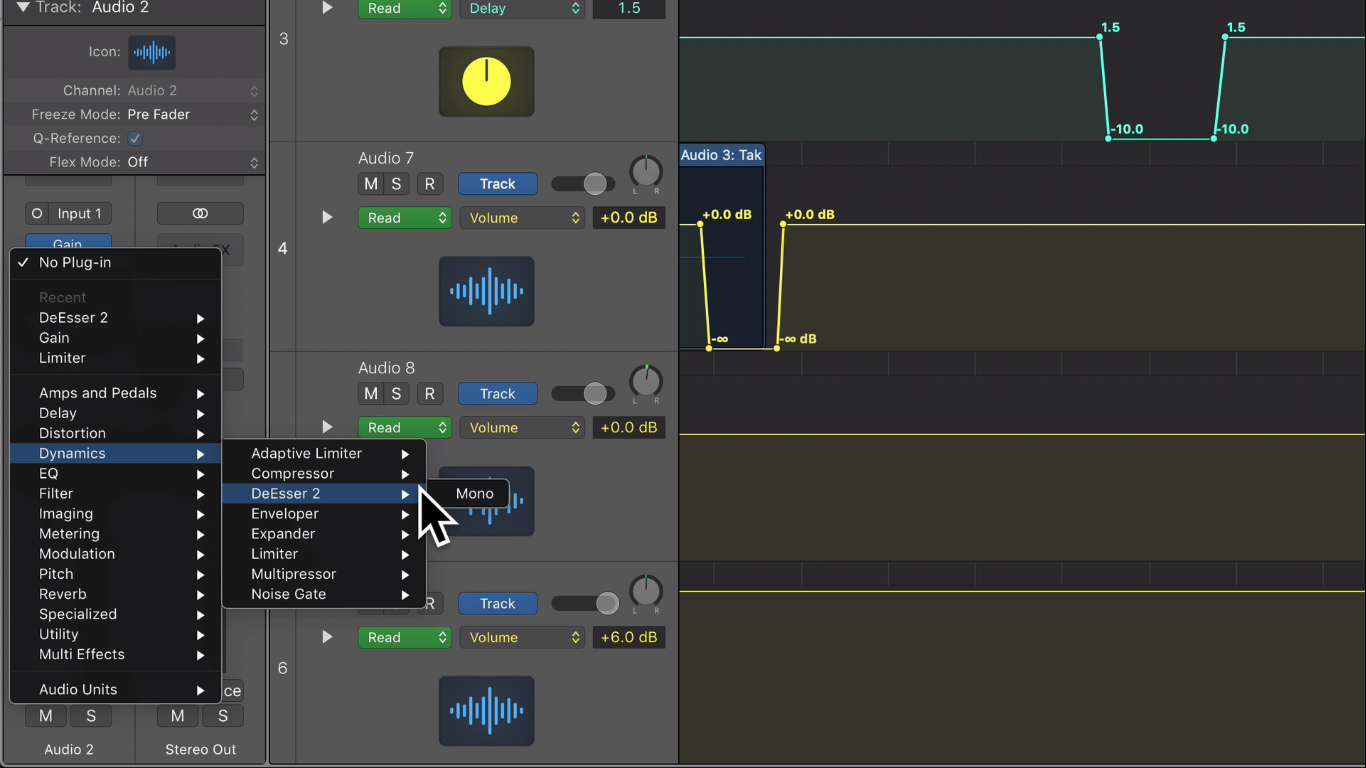 Let's get to know in detail about the De-Esser 2 plugin in Logic Pro 10. To open it, we need to go down to Dynamics and then De-Esser 2. 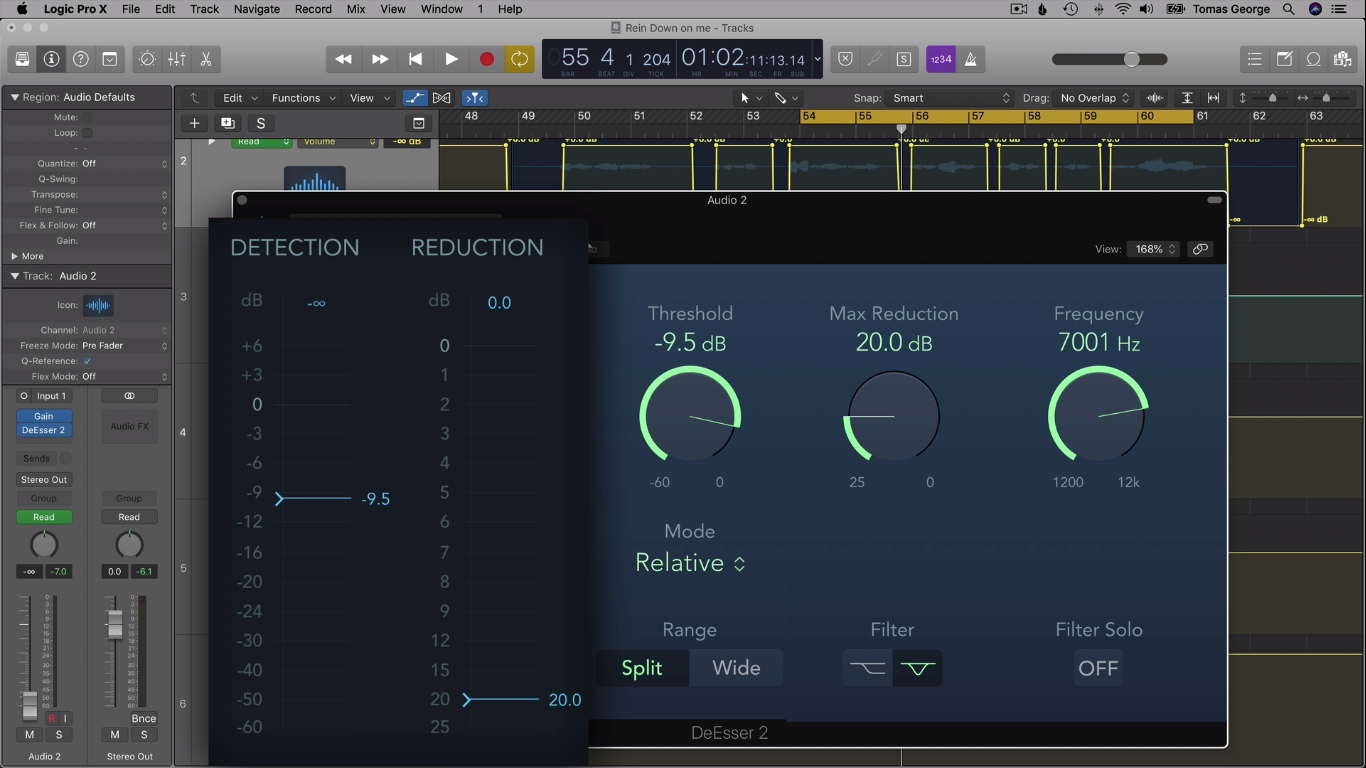 In this plugin, we have a few different dials and controls and we also have the visual meter displays. 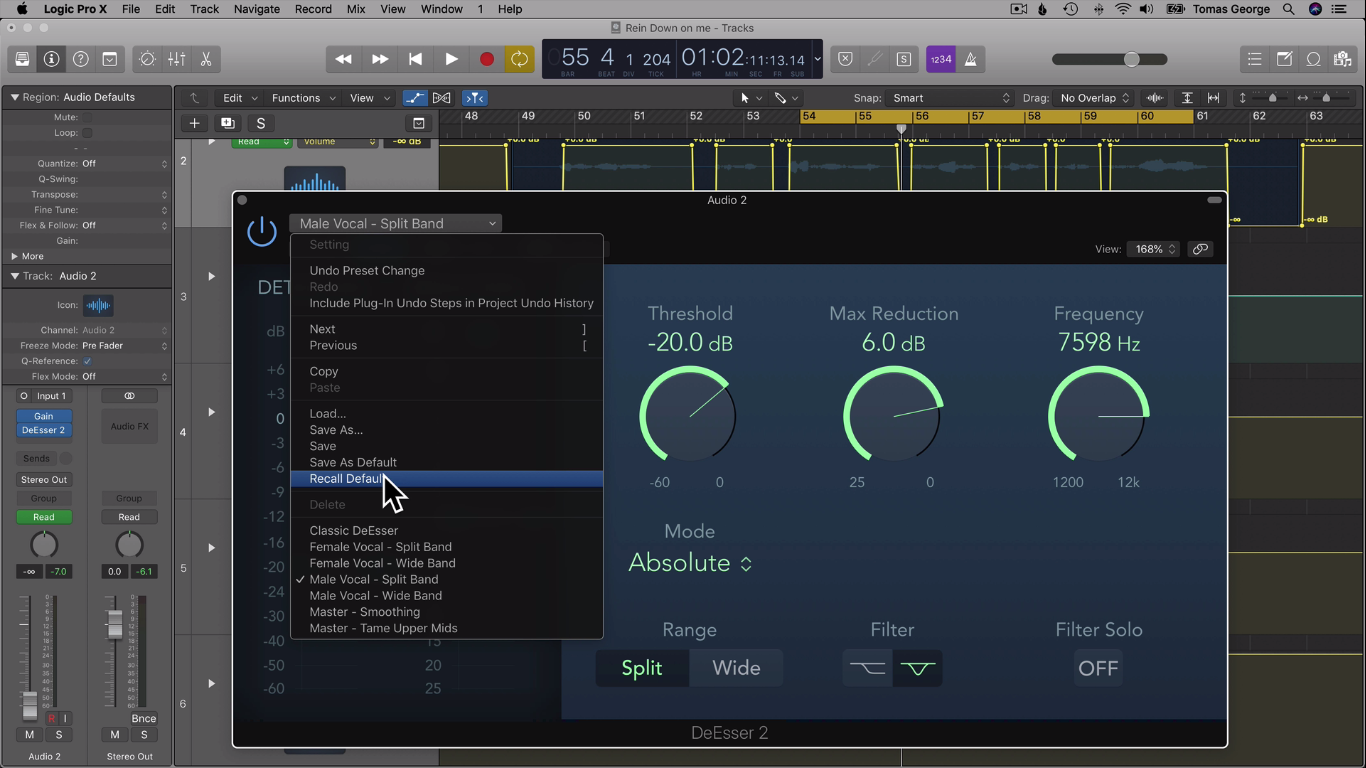 We also have a few different presets we can choose. I'm going to Record Default and work from the default. 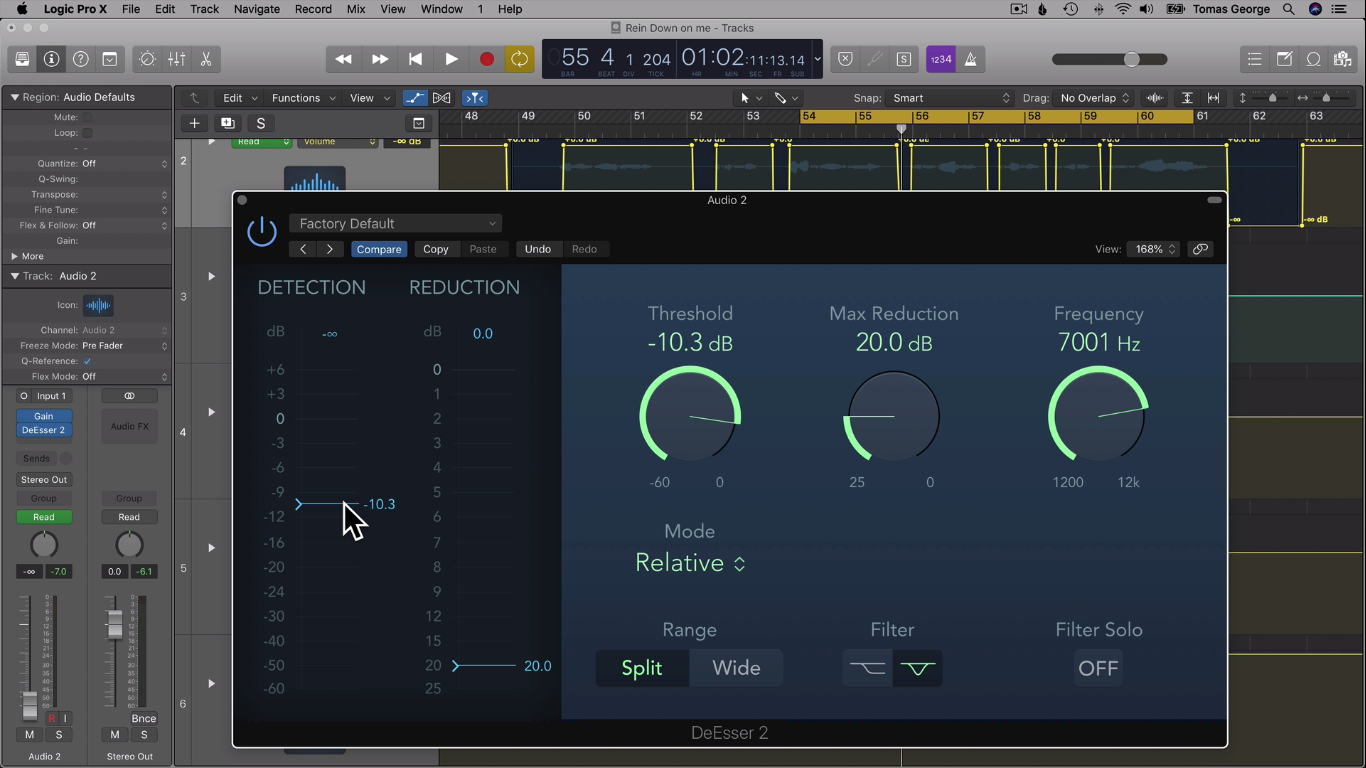 Let's have a look at the different settings now. On the left, you'll notice we have the detection meter slider. This allows to drag up or down the threshold and gain reduction will only be applied to signals above this number. 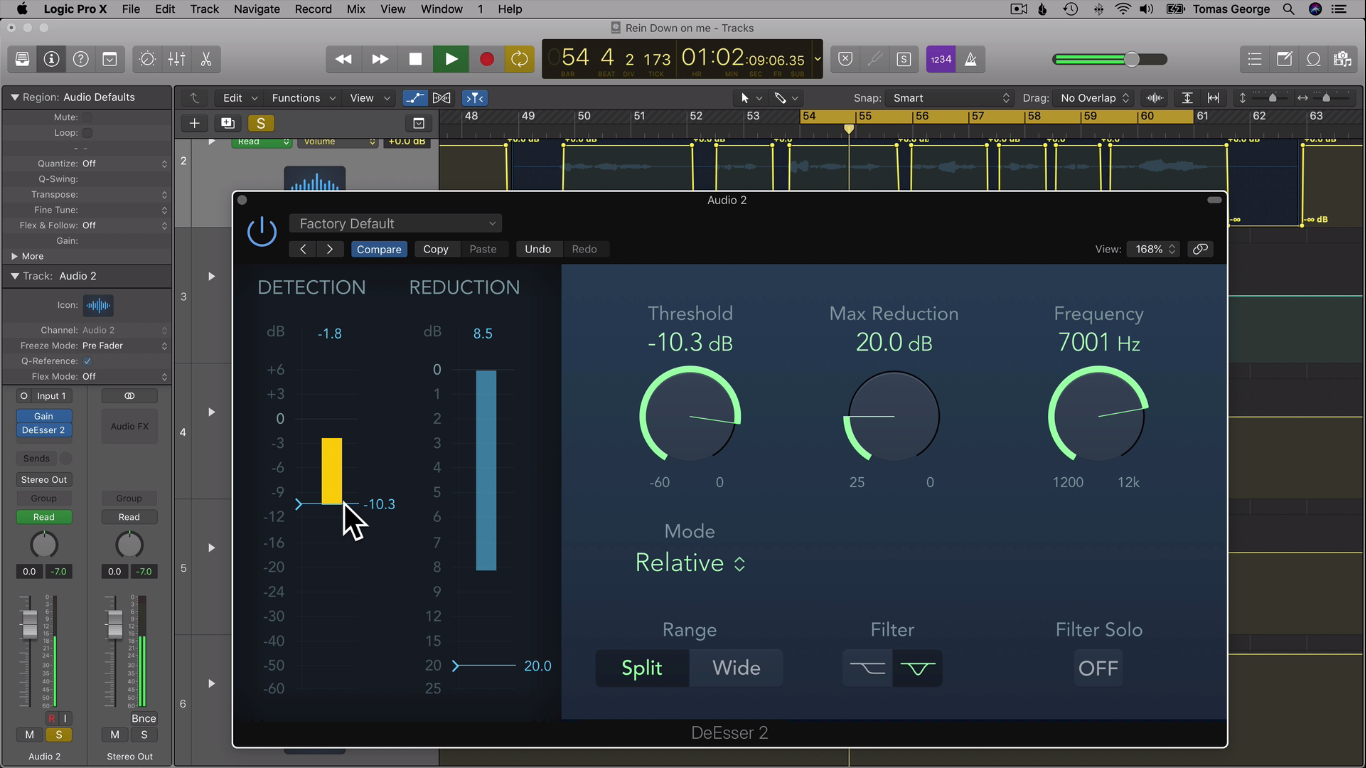 We also have a detection meter that shows us the input signal level and the level is in yellow when it goes above the threshold. 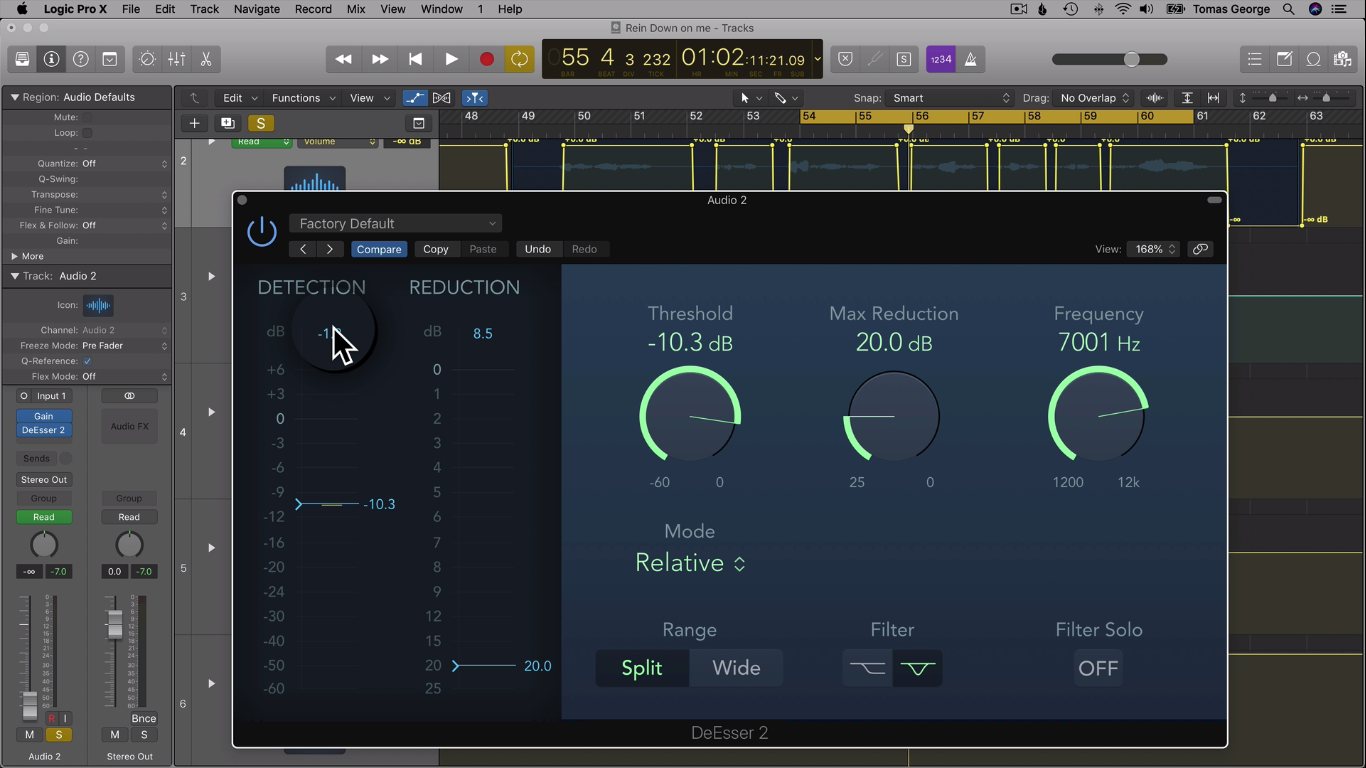 The maximum number is displayed at the top and you can click to reset this number. 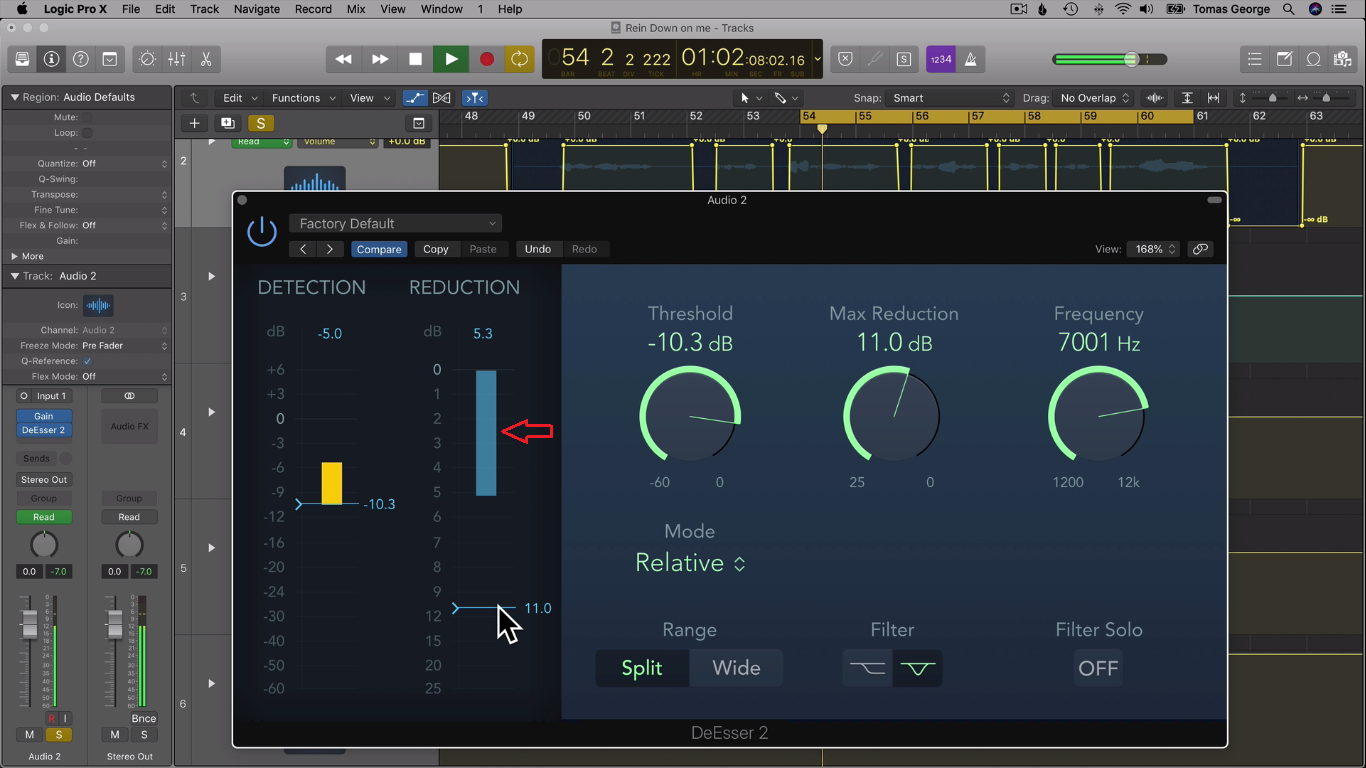 Going along, we have the Reduction Meter slider. This allows you to drag and set the maximum reduction level. We also have a reduction meter, so this shows the amount of gain reduction that's being applied. 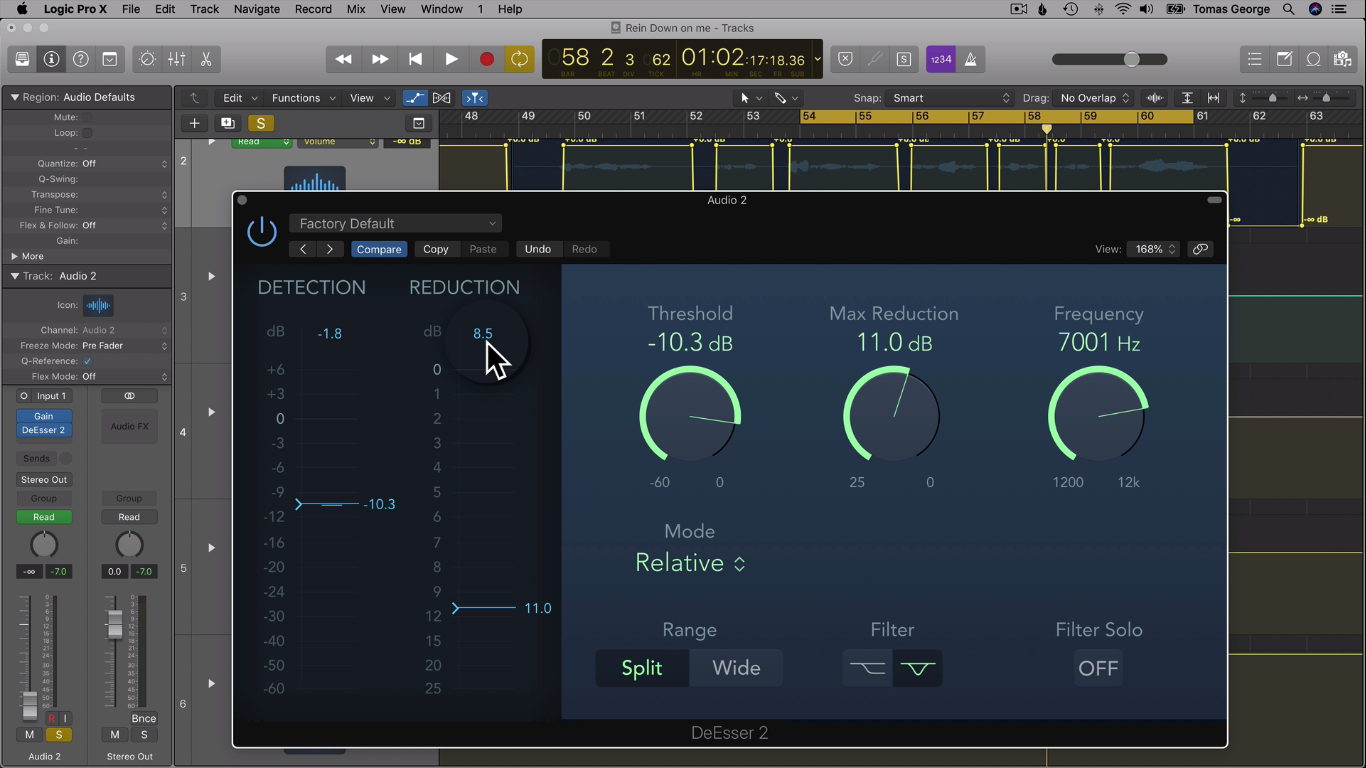 The maximum number is shown in the number above which you can also click to reset.

We have a few more controls and the first one is the Threshold. This dial does the same as the first slider on the left. A threshold basically only applies the reduction to signals above the selected number. 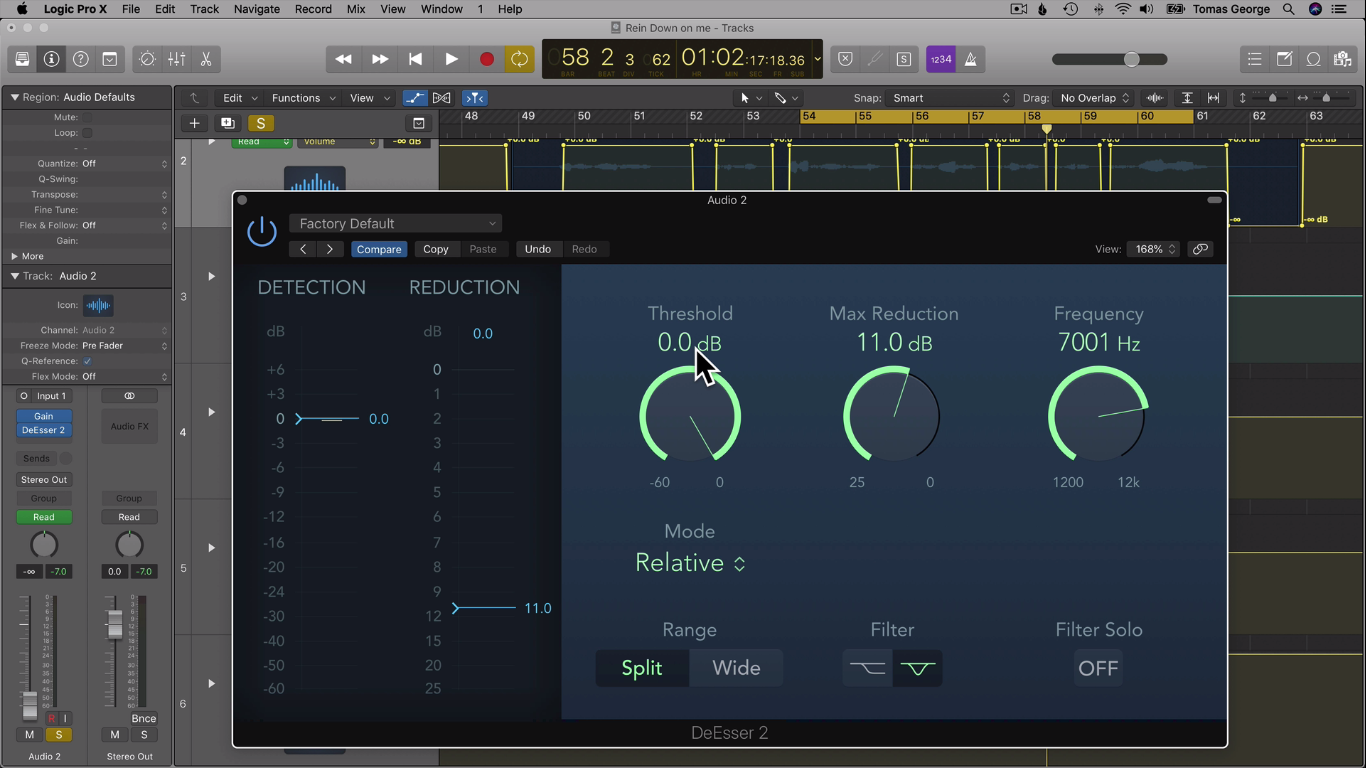 If you have it at 0.0dB, for example, it won't apply any reduction to the signal because the signal won't be above 0.0dB. 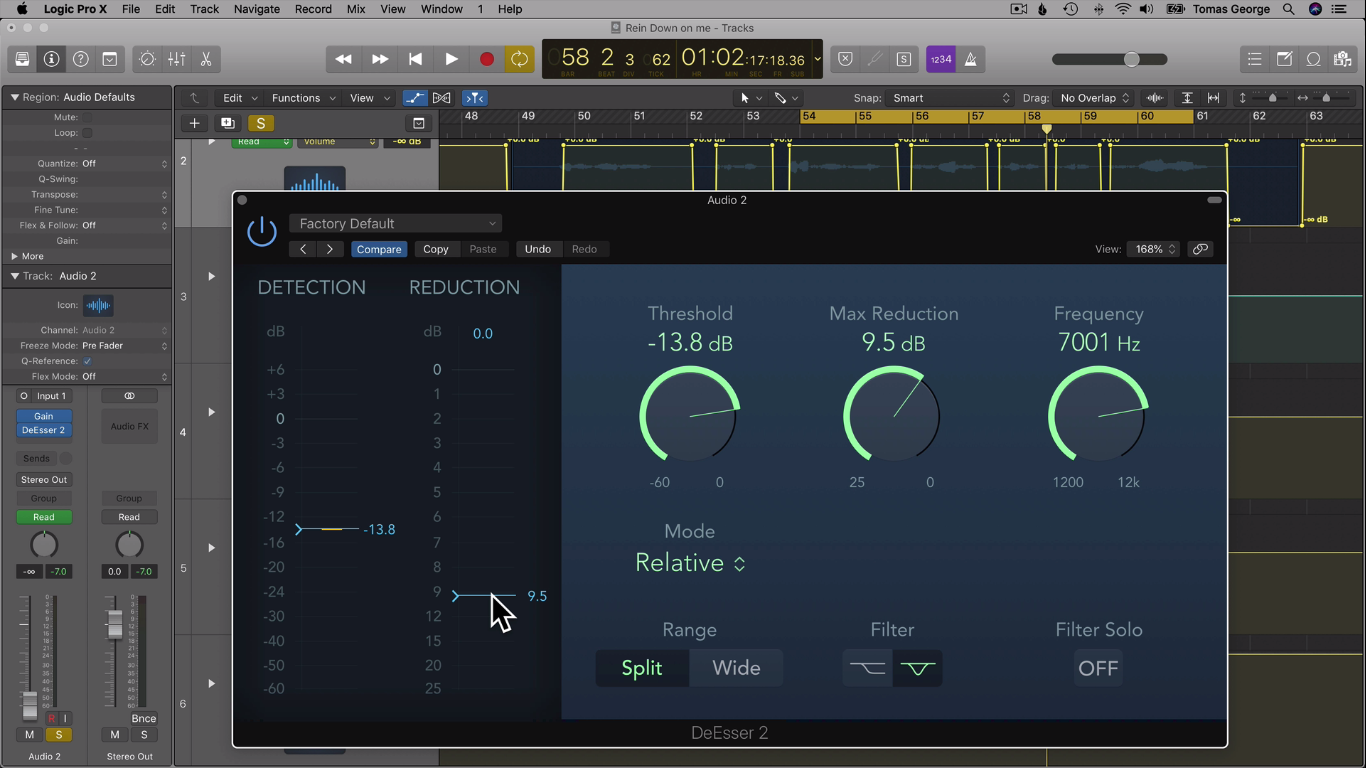 The next one is Max Reduction and this also does the same as the 2nd slider adjacent to the 1st slider. For example, 9.5dB is the maximum reduction that will be applied when the signal passes past the threshold. 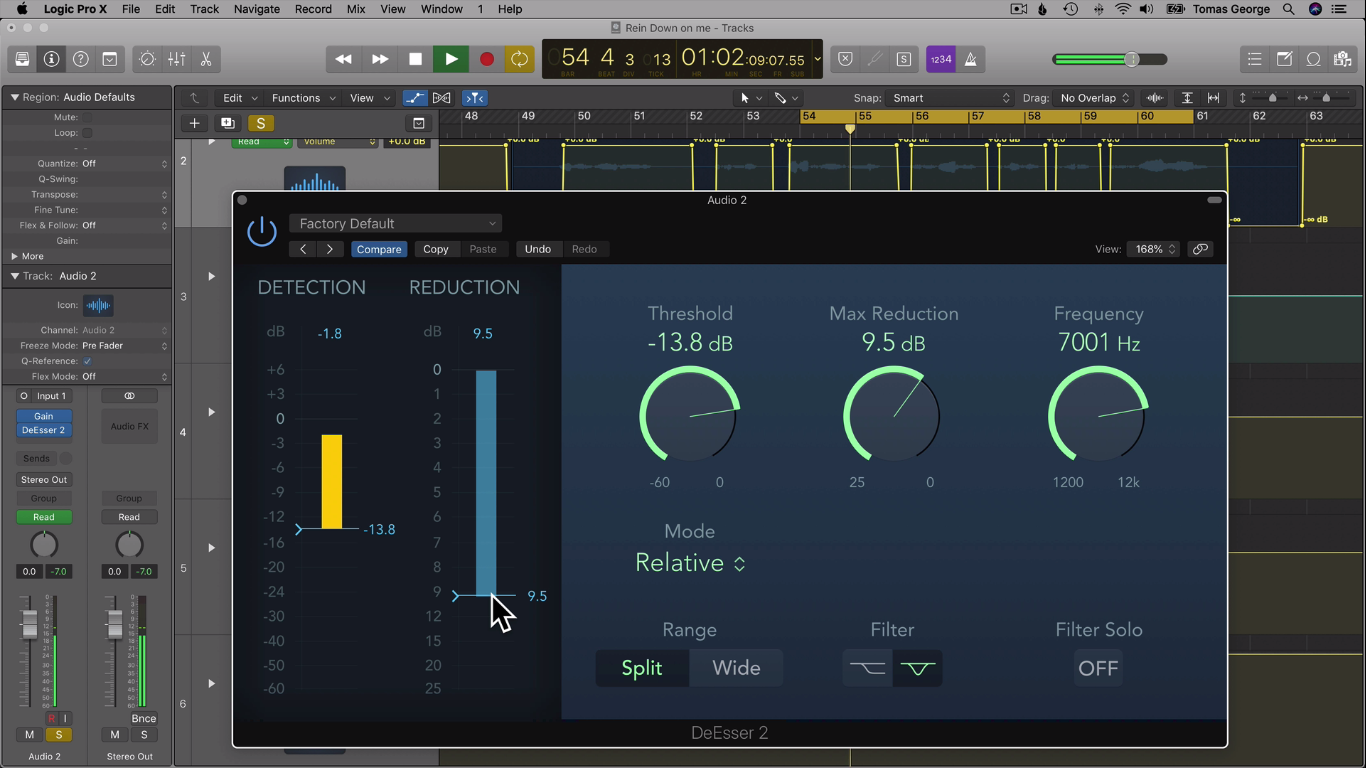 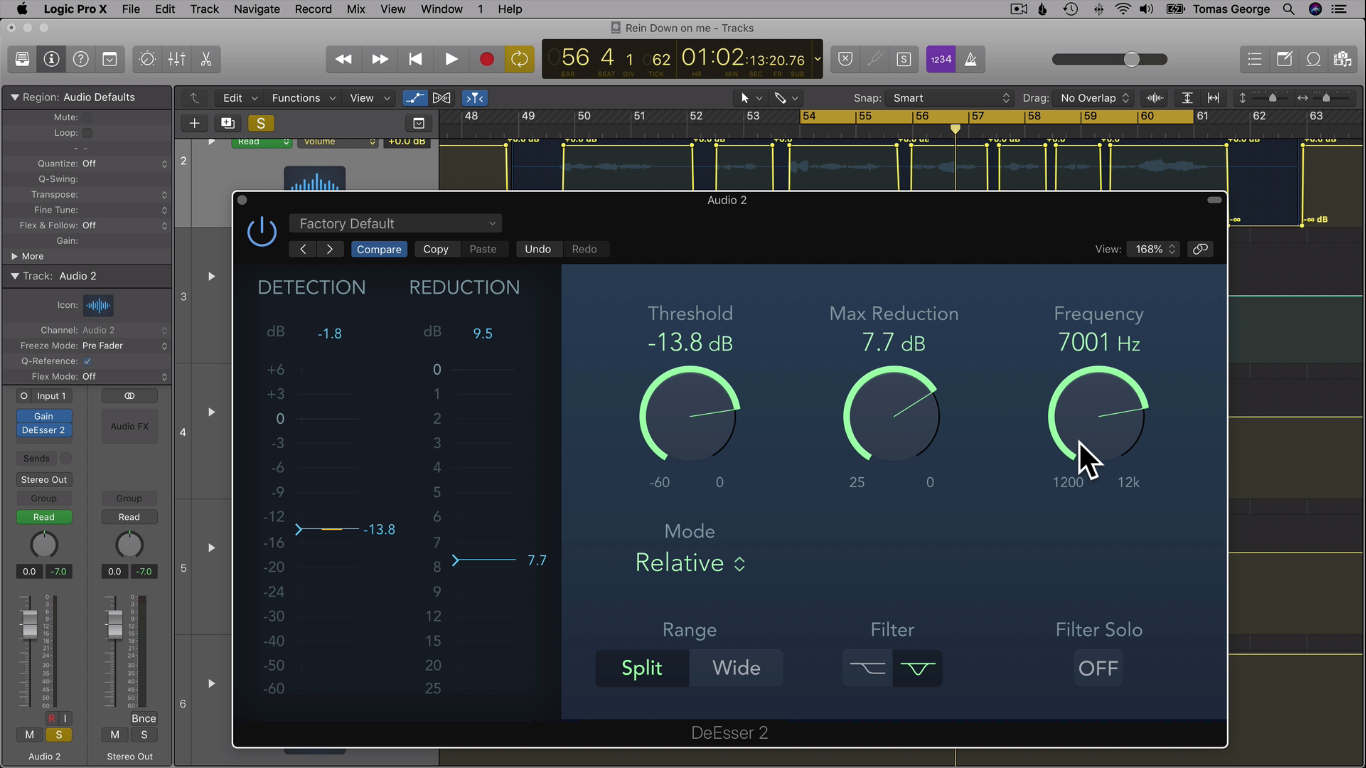 As you can see in the picture above, this is the Center Frequency that you're going to reduce. It's the frequency where the sibilance is detected at. Generally, I'd have this between 5,000Hz to 10,000Hz. It really does depend on the voice that you're mixing. For females, female vocals frequency may be a little higher. 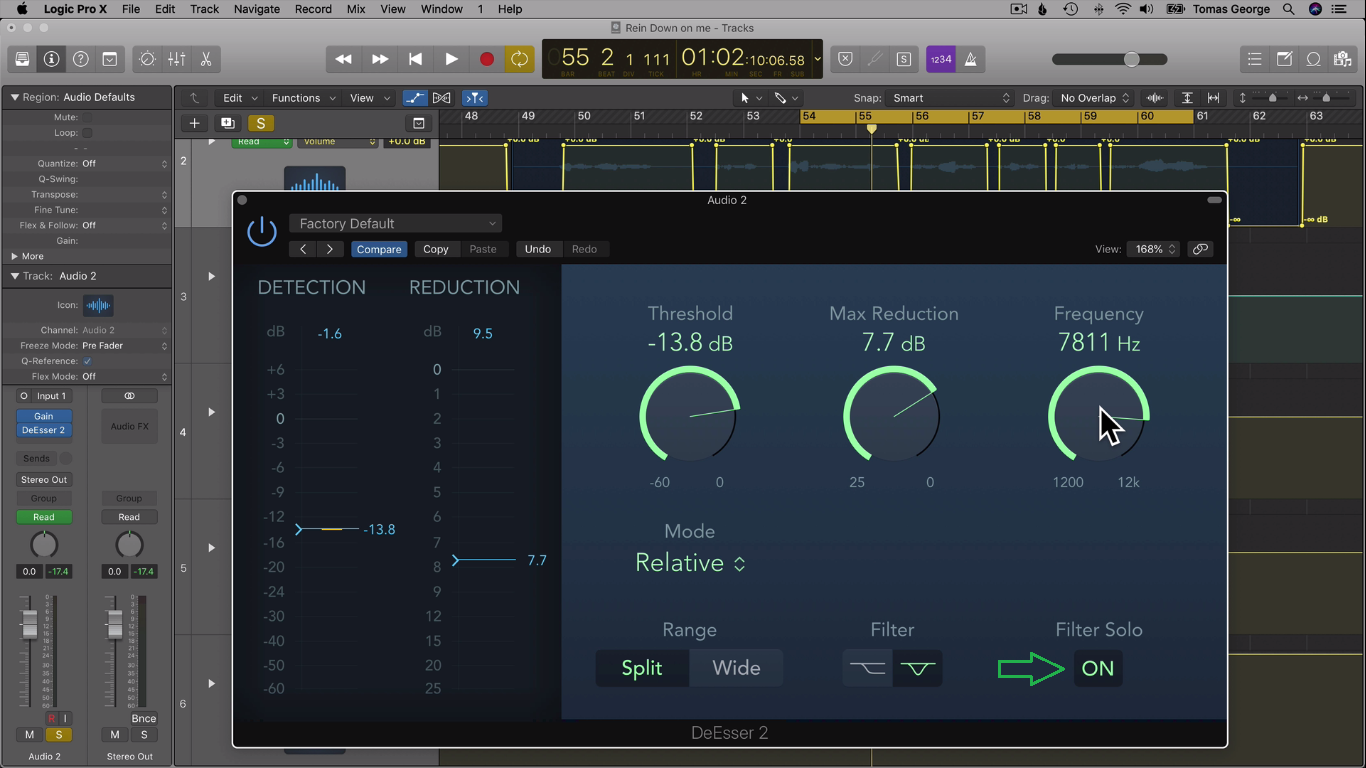 I also recommend setting the right threshold for your recording and finding the max amount of reduction. Like I said though, if you have too much De-Essing going on, it may sound like your singer has a bit of a lisp. You do want some S sounds though. You don't want to cut out too much but you may want to cut out some so the recording doesn't sound too harsh. 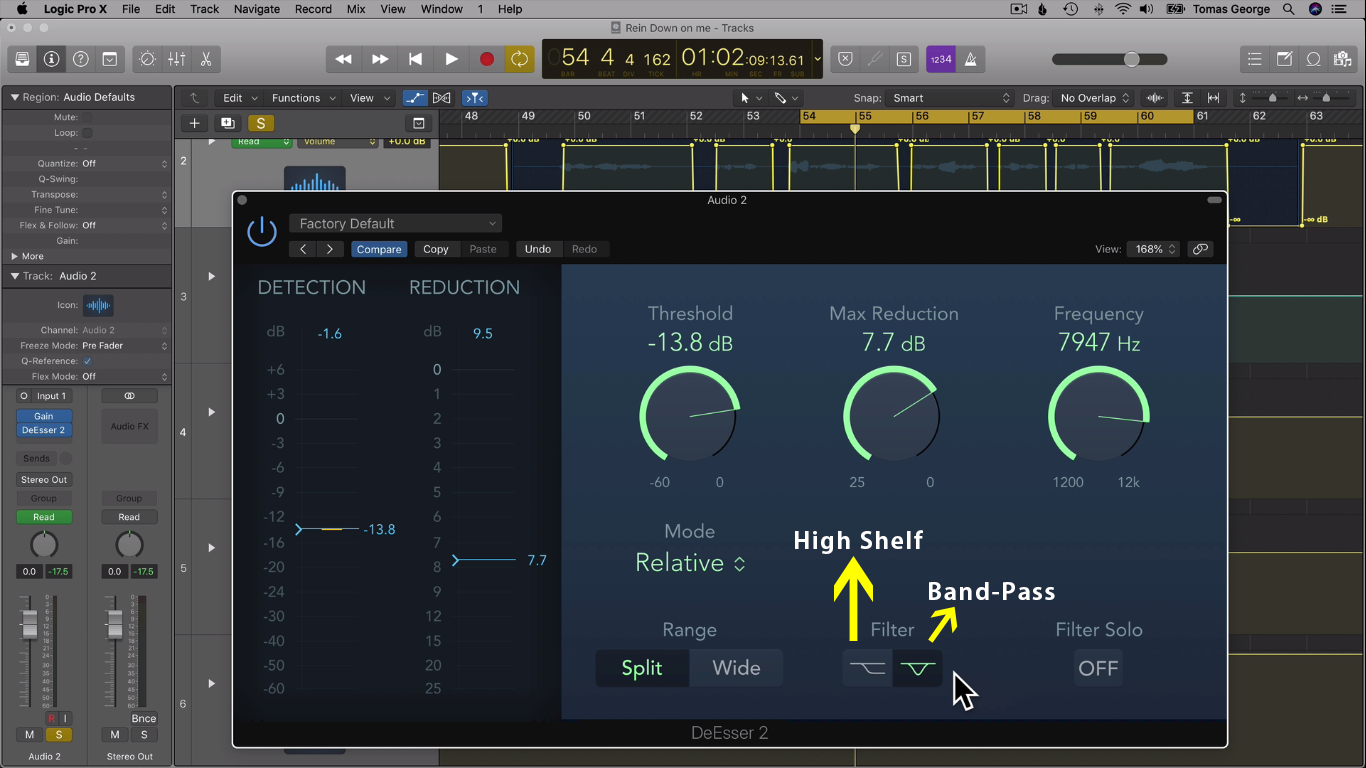 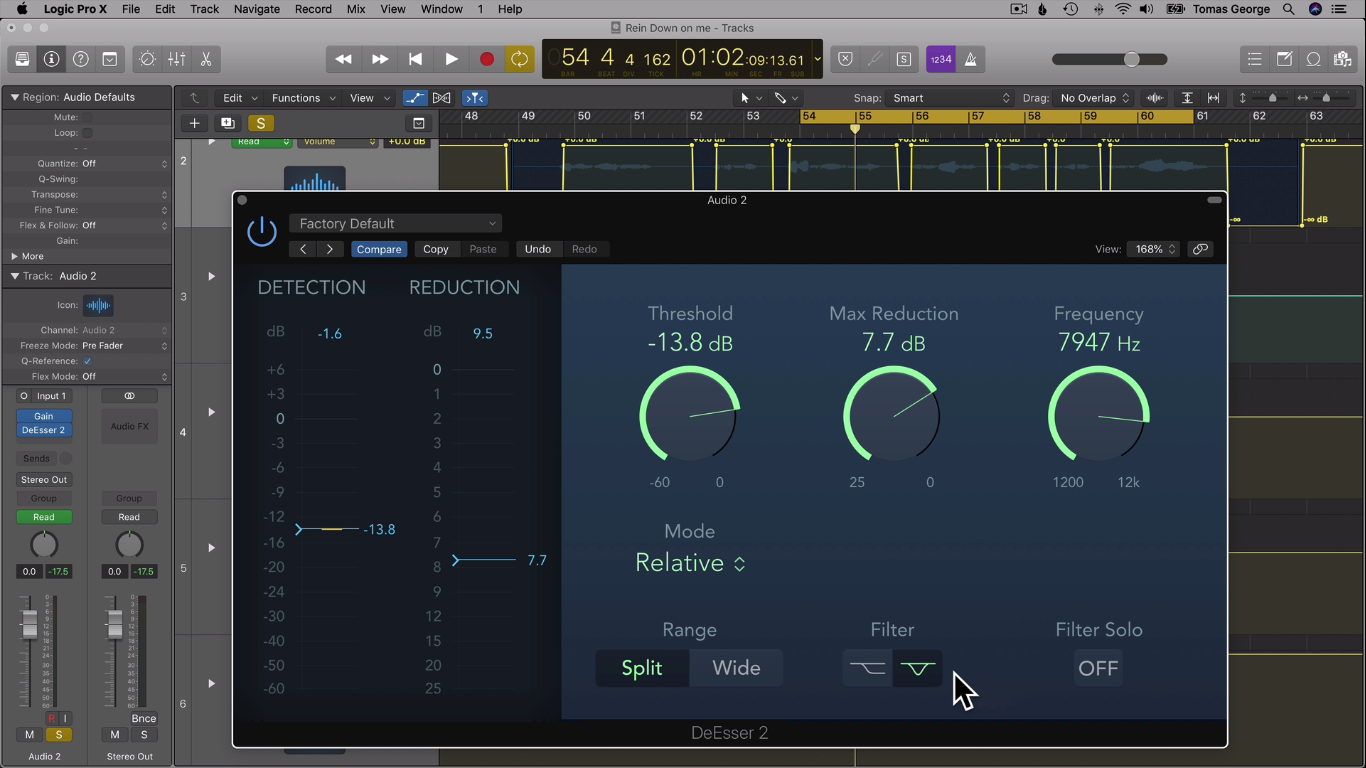 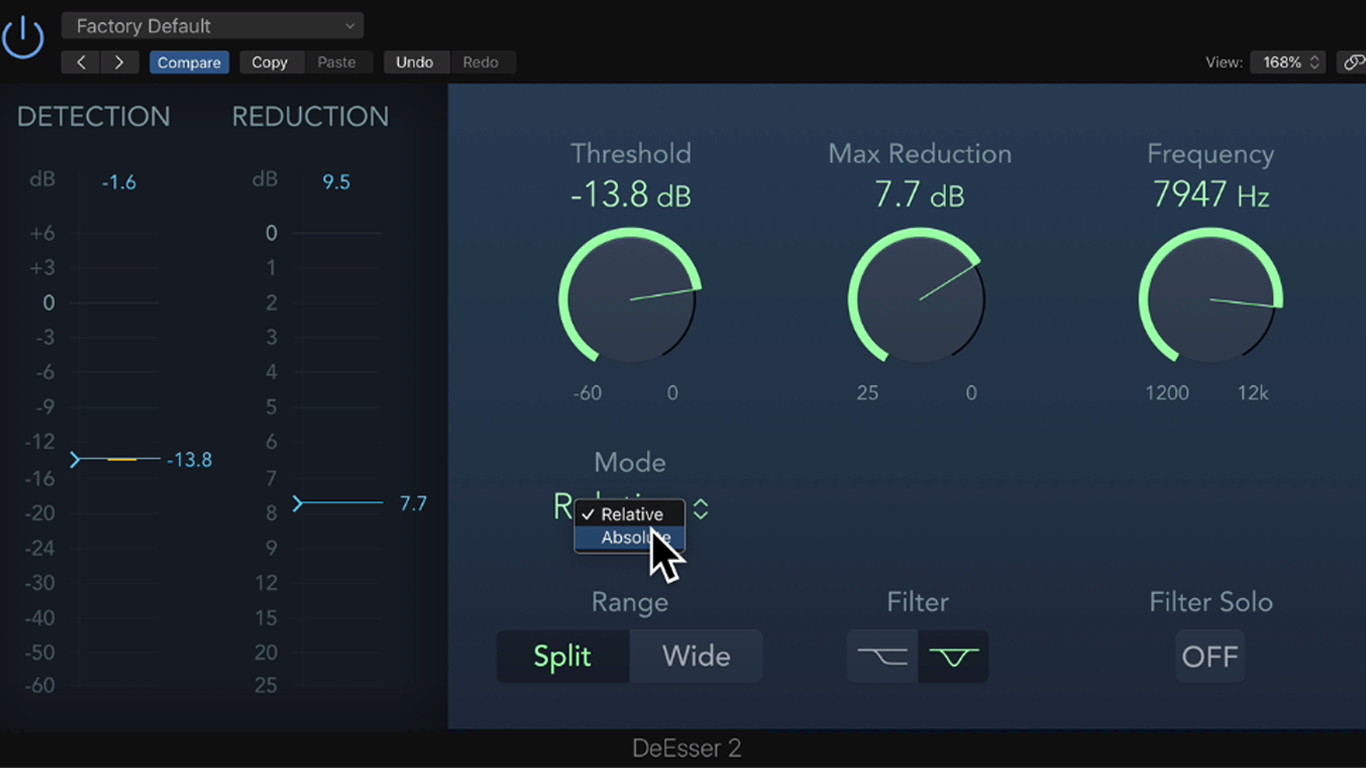 We also have 2 different modes. We have Relative and Absolute.
In the Absolute mode, if you have a very quiet signal at certain points, this can only be processed if the threshold is set to a very low value because the audio needs to go above this threshold for it to be filtered or reduced at the frequency that you select.
In the Relative mode, the signal level can actually be higher or lower than where we have the threshold set. We can adjust the threshold so it's just triggering the De-Esser and the threshold will be adjusted for a quieter or louder S sound.

If there any sibilant sounds that are quieter or louder in the audio, the threshold will be adjusted in this relative mode. So, this mode can actually give a more consistent effect and sound smoother than the absolute mode.

I do recommend going through and listening to your audio, reducing some of those harsh sibilance sounds but maybe not too much or you may get a bit of a lisping sound.

So, that is the De-Esser 2 plugin in Logic Pro X. It's kind of a multi-band compressor that only operates at a single frequency band. The De-Esser is mainly used for vocals to tame some of the sibilant sounds but we can use it for other instruments such as cymbals or hi-hats just to smooth out the sound and attenuate some of those piercing frequencies.

When De-Essing vocals, I do recommend going through and finding the right frequency you wish to De-S. The Filter Solo button can really help with this, then setting the correct threshold, choosing your mode and then adding the max reduction.

Make sure you don't reduce too much because you still want some of those S sounds and if you reduce too much, it may sound like the vocalist has got a bit of a lisp.

However, a De-Esser can be really great just for reducing some sibilant sounds that you get from S’s, F’s, and T’s. So, thanks for reading this article. I hope you found this article useful and you have learned in detail how to use the De-Esser 2 Plugin in Logic Pro X & Logic Pro 10.4.5.